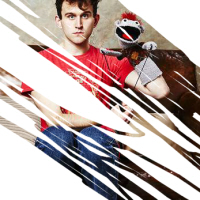 A pretty speedy transfer from Broadway to the West End - with the original creative team but a new British cast - for a show that's quickly gained a Marmite reputation, but ended up with me having no strong feelings either way. In Robert Askins' Hand to God, recently-widowed Margery (Janie Dee) is distracting herself from her grief by running a Christian puppetry class in the local church's basement, with the intention of getting teenagers to perform Bible stories at services. There's only three kids in her class though, and very little enthusiasm for the project, except from her son Jason (Harry Melling,) who's a bit too enthusiastic: Timid and bullied by classmate Timothy (Kevin Mains,) everything Jason has been repressing gets let out by his sock puppet Tyrone, who speaks to him even when they're alone, threatens violence if the boy tries to take him off his hand, and quickly becomes the dominant personality.

When Margery and Pastor Greg (Neil Pearson) see how the puppeteer is being controlled by the puppet, they believe it's been possessed by Satan - especially when Tyrone turns violent. 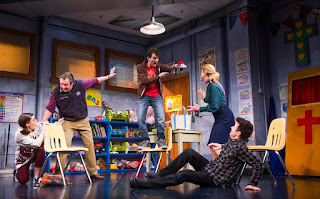 Hand to God certainly has a lot of funny moments, and Moritz von Stuelpnagel's production has the cast to bring them to life, led by the strident Dee, emotionally confused and jumping from prim churchgoing widow to Mrs Robinson when Timothy makes a pass at her; and Melling's frenetic performance - it takes a while for him to warm up into the dual role but as the play goes on we get an impressive physical performance as his own hand turns against him and starts to throw him across the stage. He also gets some menace into Tyrone's increasingly sinister behaviour, the first act closing on the revelation of why a sock puppet has teeth. 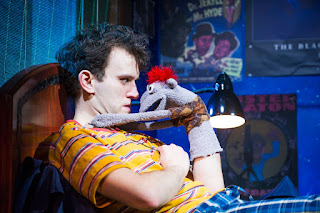 Evil Alex thought Jason's romantic interest Jessica was a bit of a nothing part - not inaccurately, although I thought she ended up being by far the most intelligent character, as she's the one who spots that Tyrone is pure id and distracts him by turning from geek to sexpot, giving Jason time to figure out what to do about him. It doesn't hurt having an actor as good as Jemima Rooper in the role to give a sketchily-drawn character life. The resulting puppet sex scene is the play's comic highlight (although, in a show that otherwise largely avoids the comparison, it's very similar to the equivalent scene in Avenue Q, except more extreme; Jessica's puppet is pretty much a smaller version of Lucy the Slut.) But the awkward looks on Melling and Rooper's faces while their puppets go at it are what really make the scene. 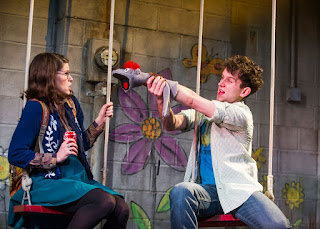 Beowulf (!) Boritt's set (most famous, of course, for including a plug socket someone tried to charge their phone in on Broadway) hides a few pleasing surprises but actually the show as a whole doesn't do the same, and I found it vaguely lacking: As a black comedy it's not quite funny enough or dark enough, and both acts come to an abrupt end, neither the story nor its themes feeling completely wrapped up - definitely a feeling of "is that it?" The play is bookended by speeches from Tyrone about man's need to invent the Devil, again not quite as funny or subversive as Askins seems to think, nor really feeling entirely connected with the story in between the speeches. Hand to God has its moments, but the whole never quite lives up to its potential.

Hand to God by Robert Askins is booking until the 11th of June at the Vaudeville Theatre.