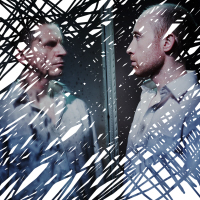 There's always at least one play that behaves like a bus, away from the stage a few years then two come along at once; this year it's Christopher Marlowe's Doctor Faustus, with two interesting directors taking it on. Up first, Maria Aberg sees Faustus and Mephistophilis as two sides of the same coin, and as such two actors share the roles, who plays whom determined by chance. As the performance opens, the two actors stand opposite each other and light matches. Oliver Ryan's match burned out first, so he was Faustus this afternoon. The scholar has exhausted medicine, the Law and theology, and is yet to find a truth about the world that'll satisfy his curiosity. His last option is to turn to the occult. He conjures the demon Mephistophilis (Sandy Grierson,) and sells his soul to hell.

In return, he wants 24 years of charmed life during which Mephistophilis will act as his servant, bringing wonders to life as well as supplying him with answers to the universal questions that occupy his mind. 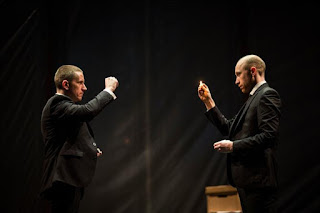 I was disappointed with Aberg's take on The White Devil but she's back on form with this stylish production that cuts down the text significantly (it runs at 105 minutes straight through, with nary a Latin in-joke in sight,) the edit allowing her to take her time creating atmosphere. Her regular collaborator Naomi Dawson provides a black-and-white design (with red joining the colour scheme in due course) that, along with Nathan Parker's projections, adds a sinister touch of madness in a German expressionist cinema style. 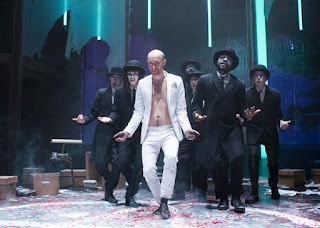 But the biggest contributor to the mood is Orlando Gough, whose almost ever-present music is oppressive (in a good way,) its discordant notes providing real menace. All in all, Aberg is providing an eerie spectacle to match the one Mephistophilis treats Faustus to. 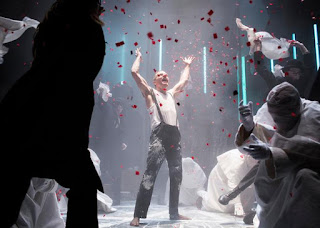 In the pairing I saw, Ryan is an actor whose diction I often have trouble with but fortunately he's a bit clearer here, his Faustus a stocky, jittery figure who runs into his own damnation before considering the consequences. Grierson as the depressive demon has a permanent sardonic grin, his part in Faustus' fate not a matter of glee but a simple case of misery loving company. His slick appearance comes with an understated brutality, a box-cutter permanently in his hand. The idea of him as an extension of Faustus himself goes so far as to have Mephistophilis speak the play's most famous lines for him (while the casting of an alarmingly young-looking Helen of Troy in Jade Croot leads to a variously uncomfortable and uniquely moving take on that particular scene.) Interestingly the lookalike casting doesn't extend to the understudy - presumably whoever's left plays Faustus if the other misses a show, as Mephistophilis' understudy is Eleanor Wyld (otherwise playing Lucifer, and styling it out this afternoon when her wig threatened to fall off.) 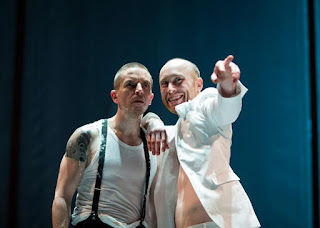 The theme of mirroring continues in Faustus' good and bad angels being dressed identically, while the other human characters become increasingly grotesque until they're indistinguishable from the demons. And perhaps all of Faustus' reward is an illusion, as suggested when he asks to spy on the Vatican - the Pope (Timothy Speyer) not seeming to come alive until Mephistophilis anoints him with soot. So another stylish production from Aberg, chock-full of interesting ideas without getting bogged down in its own cleverness - certainly a gauntlet thrown down to Jamie Lloyd and co when they tackle a rewritten version of the play in a few months' time.

Doctor Faustus by Christopher Marlowe is booking in repertory until the 4th of August at the Swan Theatre, Stratford-upon-Avon.