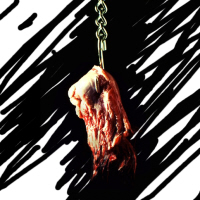 With the Swanamaker having a Shakespeare year it's left to other venues to showcase his contemporaries, and the Old Red Lion does have previous form with Jacobethan revenge tragedies. Thomas Kyd's The Spanish Tragedy gets seriously pared down both in text and style in director Dan Hutton's production. A brief war between Spain and Portugal gets resolved with a treaty in which Spain has both the upper hand, and a Portuguese prince: Technically a hostage, Balthazar (Jamie Satterthwaite) is more like a guest at court, who's made great friends with one of the royal princesses, Lorenzo (Janet Etuk,) and has set his sights on marrying the other, Bel-Imperia (India Semper-Hughes.) She's not so keen because Balthazar killed her fiancé in the battle and besides, she's now moved on to his friend Horatio (Lee Drage.) So Balthazar and Lorenzo kill Horatio as well, convincing the King (Leo Wan) a royal marriage would be a good idea.

Unable to say no, Bel-Imperia instead leaves a note to Horatio's mother Hieronimo (Rebecca Crankshaw,) alerting her to the real killers' identity; Hieronimo goes on a mission of revenge for her son's death, which will climax in her staging a play-within-the-play much bloodier than Hamlet's "Mouse-Trap." 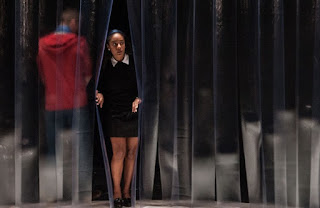 Lizzy Leech's clinical, pristine slaughterhouse set design just waiting to be dirtied up with blood (literally blue aristocratic blood, as it turns out*) is a stylistic match for the pared-down performance style, but while this is an enjoyable 90 minutes you can strip things back too much: Although the performances are generally strong, there's not a huge amount of variety in them and at quieter moments it let my concentration wander. The bare-bones script also leaves characterisation a bit undercooked: With Satterthwaite's Balthazar a Tim-Nice-But-Dim figure, Lorenzo is the real villain here, although why exactly she joins in this whole plot against her own family remains frustratingly unanswered; fortunately Etuk rocks the Leather Pants And Swishing Coat Of Evil combo well enough that we just accept her as the Big Bad. 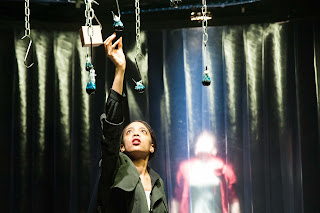 The programme credits "additional material by the company" but fortunately this doesn't mean a Julian Fellowes-style "more Oxbridge than thou" rewrite of every line‡: Instead Hutton is saving it for an effective coup de théâtre in the climactic play-within-a-play. This minimalist take on The Spanish Tragedy has mixed success - cutting a revenge epic down to just six actors (and only Drage and Wan even do any doubling of roles) is tricky but expertly done, and there's memorable performances, particularly from Etuk's gender-swapped villain, but some of the blood and fire that made these plays so popular in the first place has also been lost along the way.

The Spanish Tragedy by Thomas Kyd is booking until the 5th of March at the Old Red Lion Theatre.

*except for Hieronimo for some reason

‡I'm still concerned that's what we might be getting at the Globe this summer
Posted by nick730 at 17:34