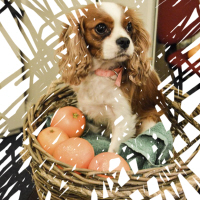 Jessica Swale's Nell Gwynn, which I put at number 4 in my Top Ten productions of 2015, has made it to the West End for a deserved wider audience; you can read myoriginal review of Christopher Luscombe's production here, from its run at Shakespeare's Globe. With Hugh Durrant's design recreating a slightly smaller version of the Globe's stage for the Apollo, much of my original review stands (except for Sarah Woodward nicking someone in the audience's drink; harder to do on a pros arch.) Of course, one major change is in the lead, Gugu Mbatha-Raw having had filming commitments. But you couldn't have asked for a better replacement than Gemma Arterton, who has just the right kind of charisma - much of it consisting of a wicked sense of fun - to bring both the steely determination of the first-ever female star actor, and her warmth to life. (And we already knew from her turn in Made in Dagenham that Arterton could handle Nell's bawdy songs.)

Elsewhere Michele Dotrice probably has the next hardest job as dresser Nancy, not quite as sublimely funny as Amanda Lawrence* was in the original cast, but a frequent scene-stealer nonetheless. 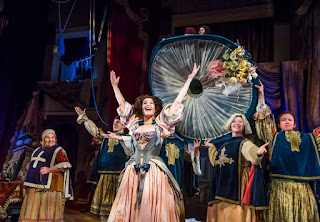 Peter McGovern takes over novice actor Ned, and Nicholas Shaw the hack John Dryden, with most of the rest of the cast remaining from last summer. It may have moved to a Victorian proscenium arch, but the cast have transferred the fourth wall-breaking style effectively from the Globe - Charles II's (David Sturzaker) anti-austerity comment getting almost as big a cheer as the showstopping dog. Even if it feels marginally less frenetic than last time around, Nell Gwynn remains a firm recommendation; when I suggested coming along to the original run, none of my friends joined me, but this time around Jan was smart enough not to miss out again: At the end he said it was the kind of show that made him sorry it had to end.

Nell Gwynn by Jessica Swale is booking until the 30th of April at the Apollo Theatre.

*Lawrence was in the audience tonight, along with fellow former cast member Stiofàn O'Doherty, and they seemed to be really enjoying seeing the show from an audience's perspective
Posted by nick730 at 23:13