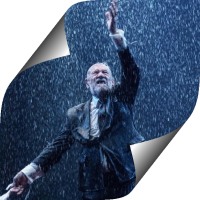 Theatre review: After the Rehearsal / Persona 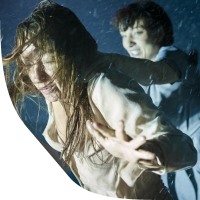 It would be far too time-consuming and expensive for the Barbican to send someone to every single audience member’s home to scream “WE HATE YOU!” into their faces, but they’ve come up with a more straightforward way of getting the message across: When scheduling a Belgian director’s Dutch version of two Swedish films that comes in at over three hours, why not make the start time 7:45pm? Also, you can make tannoy announcements that it’ll start dead on time, which the audience dutifully follow, and then start five minutes late anyway. That way anyone seeing Ivo van Hove’s ponderous double bill After the Rehearsal / Persona can be tired and a bit grumpy going into a claustrophobic, impenetrable evening, downright sleepy by its last hour and not much the wiser about any of it by the end. The bit where Jan Versweyveld’s set fell apart and splashed into a lake was good though. 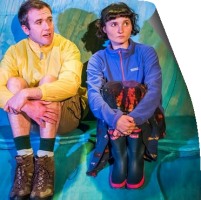 In a story that jumps back and forth fifteen years, Sophie Wu has put together what feels like parts of two different plays, one of which works much better than the other. Ramona Tells Jim takes place in a remote part of coastal Scotland – “the shittest village in Scotland” according to Jim (Joe Bannister.) At age 17, he’s a loner who likes collecting crustacea and dreams of becoming a marine biologist. Meeting Ramona (Ruby Bentall) will make for a memorable few days but will also be partly responsible for thwarting his ambition: An awkward 16-year-old English schoolgirl on a geography field trip, she’s his first romance, but early on in the play we get a clue that a violent event will sour the memory of their relationship. 15 years later Ramona turns up again unexpectedly, first on Facebook, then on Jim’s doorstep. 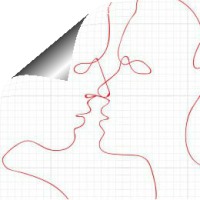 The critics may well get to see one of the leads performing most of the play script-in-hand as Alexander Hanson, a late replacement for an ill James Dreyfus, was at today’s performance only off-book for two of the play’s scenes. This is for the latest from Florian Zeller, who seems to like his plays to come in pairs: The Truth is followed up by The Lie, another comedy of infidelity, which even has its characters share the names of the earlier play’s quartet (although they don’t actually appear to be the same characters, unless they’re alternate-universe versions.) And as The Truth was about lies, then The Lie is about truths, and passing off the truth as a lie. If that all seems a bit convoluted and circular you should see the actual dialogue, which at one point I thought had actually turned into a real-life version of the famous “loop” scene from The Play That Goes Wrong. 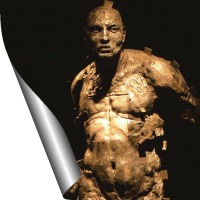 Season director Angus Jackson returns for the fourth and last of the RSC's Roman plays, and although Coriolanus is set earlier than the other three, designer Robert Innes Hopkins eschews the togas of the middle two plays, to match the modern dress of Titus Andronicus. In fact this also starts with a rioting gang in hoodies, and since it will actually play first when they all transfer to London, it annoyed me a bit that it'll look there like Blanche McIntyre copied the idea. Fortunately there was less to annoy me about the rest of the production, in which Sope Dirisu takes on the least likeable of Shakespeare's tragic heroes. Caius Martius, later given the title Coriolanus after one of his many military victories, is a one-man Roman army, raised as such by his batshit bloodthirsty mother Volumnia (Haydn Gwynne.) 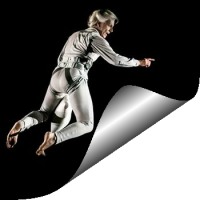 Just like a plane, a stage, a sanitary towel or a bucket of fried chicken, Juliet Stevenson has Wings in Arthur Kopit’s 1979 Broadway play. The Young Vic’s revival sees her reunite with director Natalie Abrahami, who has a very specific vision for this story of a highly active older woman relearning how to interact with the world after suffering a stroke. Stevenson plays Emily Stilson, who not only piloted vintage planes but used to do wing-walks on them. But we meet her just as she has her stroke and she’s thrown into confusion, feeling at a disconnect as if she’s floating over the world. It’s a stream-of-consciousness narrative that Abrahami takes literally, having Stevenson fly on wires above the stage, initially unable to touch down on the ground. 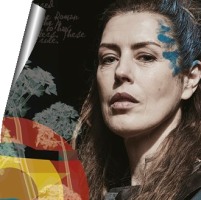 Closing this year’s Globe summer season is a new play that playwright Tristan Bernays has crafted to fit in very well with the old ones that make up most of the theatre’s repertory. And it’s based around a character who it’s strange to think none of the original Globe’s playwrights tackled, the only reason I can think of being the ban on female actors meaning too big a burden being placed on a young boy; because Boudica has all the elements Jacobethan theatre liked to get stuck into. Set during Nero’s reign, the Roman Empire occupies Britain with the help of some of the former tribal kings. Known as client-kings, they pay taxes and stop their people from rebelling in return for getting to keep their titles and lands. The play begins with the death of a leading client-king, whose widow Boudica (Gina McKee) expects to inherit half his land as per the agreement he made with the Romans. 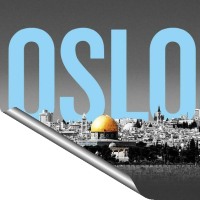 Getting a quick transfer from a hit Broadway run to the West End, J.T. Rogers’ Oslo first spends a couple of weeks at the Lyttelton; Bartlett Sher’s production gets an all-new British cast to tell the behind-the-scenes story of historic Israeli-Palestinian peace talks. It’s the early 1990s and Middle East peace talks are dominated by the Americans, who insist on a negotiating style that puts all demands on the table – it’s never yielded results, and attacks continue from both sides. Norwegian sociologist Terje Rød-Larsen (Toby Stephens) believes he’s come up with a better model, based around smaller groups of negotiators getting to know each other as people, and chipping away slowly at concessions. Terje’s wife Mona Juul (Lydia Leonard) works at the Norwegian Foreign Ministry, and helps set up a back-channel between senior Israelis and PLO members, behind the Americans’ backs. 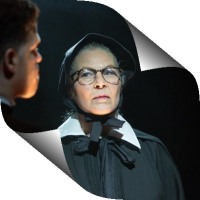 The Catholic Church is famous for its choirboy-abusing priests, but a lesser-known fact is that there’s also a system of religious beliefs attached to it. John Patrick Shanley’s Doubt, a Parable uses the former to look into questions of the latter, in a story set in a New York convent school in 1964. Headmistress Sister Aloysius (Stella Gonet) is a stern disciplinarian who’s fiercely opposed to change, ball-point pens, the song “Frosty the Snowman,” and either teachers or students actually enjoying their lessons. Her mission to crush all the joy out of young teacher Sister James (Clare Latham) has to be interrupted as she needs her help to investigate the school priest Father Flynn (Jonathan Chambers,) whom she suspects of taking an inappropriate interest in the pupils. The school has just taken on its first-ever black student, and Flynn seems keen to get particularly close to him. 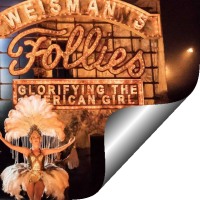 Follies is probably the best-known Stephen Sondheim musical I hadn’t yet seen, and the sheer scale of Dominic Cooke’s production at the National suggests why it’s a risky proposition for any smaller theatre to take on. Between 1918 and the early 1940s, Weismann’s Follies were a Broadway staple, but the story takes place in 1971, and the theatre where they played is being demolished to make way for offices. On the building’s last night, Weismann invites the show’s former stars to the site for a farewell party and to reminisce about their time in the limelight. In Vicki Mortimer’s striking design the theatre is already half-demolished, and what remains of it is haunted by the ghosts of the characters’ younger selves, who recreate the routines from their heyday, and watch the people they’ll turn into in curiosity and sometimes horror. 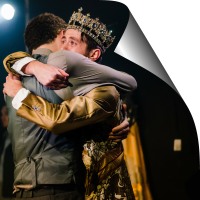 A few years ago Ricky Dukes directed a production of Dido, Queen of Carthage I enjoyed, and now he and Lazarus Theatre return to Christopher Marlowe for a heavily edited and adapted version of Edward II. Luke Ward-Wilkinson plays the titular king, who in the opening scene learns of his father’s death and his own accession to the throne, and responds by immediately recalling his banished lover Gaveston (Bradley Frith,) much to the displeasure of his nobles. Whether Gaveston is at court or in exile, he’s a constant distraction to the king, and with conflict at home and abroad his attention is needed for the safety of England. At least that’s their story: Beneath the rhetoric the rebellion led by Mortimer (Jamie O’Neill) looks more like an opportunistic grab at power from a weak and distracted king. 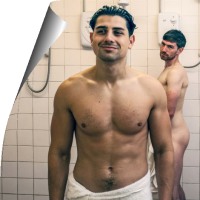 Writer/performer Rob Ward seems to have found a niche for himself with plays about gay sportsmen; a few years ago he co-wrote and acted in monologue Away From Home, about a gay footballer in a secret relationship, and now he takes on solo writing duties while sharing the acting with Ryan Clayton in a story where the relationship is still secret, but the sport’s much more up-front about its aggressive side. In Gypsy Queen Clayton plays Dane “The Pain” Samson, a promising boxer, openly gay in his father’s gym where he trains, and where everyone pretty much accepts this; but wary about his sexuality being known more generally, and worried that one sports reporter in particular keeps sniffing around it. Ward is “Gorgeous” George O’Connell, from an Irish traveller background, who bare-knuckle boxes in pub car parks until Dane’s father talent-spots him and invites him to turn professional.