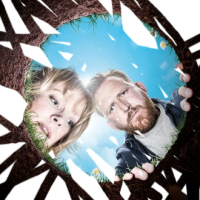 American playwright David Lindsay-Abaire's Rabbit Hole has had a bit of a stuttering journey to the London stage - a couple of years ago a big West End production was announced, only to get cancelled almost as soon as it went on sale. Now, after the venue had a hit with Lindsay-Abaire's Good People, Hampstead Theatre becomes the natural home for his family drama of grief. We open with a domestic scene as Becca (Claire Skinner) washes and folds a child's clothes as her sister Izzy (Georgina Rich) catches her up with her latest personal dramas. This surface of normality is hard-bought though, as it turns out Becca is getting the clothes ready to take to charity, her 4-year-old son having run out into traffic and died eight months earlier. She and her husband Howie (Tom Goodman-Hill) are both trying to deal with the loss in their own ways, but their different coping strategies are putting a strain on their relationship.

Ashley Martin-Davis' set is a gentle thrust, giving us a pretty naturalistic look at the luxurious suburban house that becomes a focal point in their arguments - she wants to move out as the memories of their son bound up in it are too painful, he thinks she's trying to erase all traces of the child. 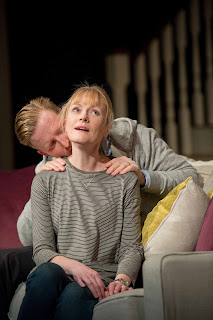 Edward Hall's production is very strongly cast, with the always-excellent Skinner giving a quietly moving heart to the story. There's contrast from Goodman-Hill as Howie always seems to be on the verge of a more explosive kind of grief, while Rich as the misfit sister gets a lot of good moments. Becca's mother Nat feels like a rather vaguely-defined character but Penny Downie helps fill in the gaps. 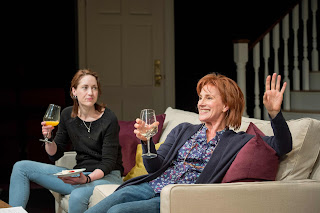 Although admittedly well-written, there's not much about Rabbit Hole that feels particularly new, so it may be just as well that West End run never came about (although with Hampstead's track record, we could yet find out if there's a wider audience for it.) Where the play really comes into its own is with the understated meeting between Becca and Jason (Sean Delaney,) the teenager who accidentally ran over her son and, despite everyone's protestations to the contrary, inevitably feels guilty. 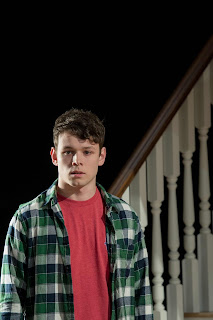 This meeting does go a little way towards Becca finding a way forward, and not necessarily in an obvious way. Overall, Hall's production is a low-key, quality offering; there's not a lot of fireworks or inventiveness to make it stand out, but the writing's heartfelt and there's no arguing with the quality of the cast.

Rabbit Hole by David Lindsay-Abaire is booking until the 5th of March at Hampstead Theatre.