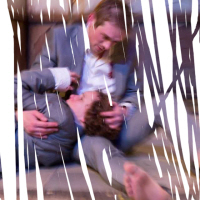 It can be hard to buy the critical opinion that underneath the torture porn Sarah Kane's work is essentially about love; but it's a fact that seems strangely obvious, yet hard to quite grasp, in the two hours of body horror that is Cleansed. Heroin addicted Graham (Graham Butler) dies of an overdose injected into his eye by Tinker (Tom Mothersdale,) in a decrepit institutional building (grungily designed by Alex Eales.) Some months later his (twin?) sister Grace (Michelle Terry) voluntarily checks herself into Tinker's care in an attempt to connect with her dead brother. There she witnesses, and becomes part of, the sadistic experiments that go on there: A couple, Rod (George Taylor) and Carl (Peter Hobday) are made to declare their love for each other, and Carl unwisely says he'd die for his lover, a statement the torturer decides to test - piece by piece.

Grace also encounters the ghost of Graham, and we get to see what their too-close relationship was like - it's hinted that their incestuous feelings might have been what drove him to drugs. 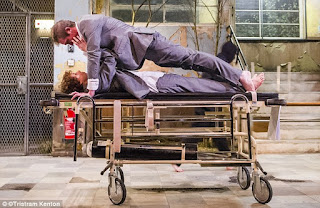 Tinker, widely thought to be named after the critic who most enthusiastically panned Kane's Blasted*, and played with magnetic menace by Mothersdale (who might want to look into why he's become Katie Mitchell's go-to guy when she needs a sadist) is indeed fascinated with, or possibly repulsed by, love; like a mean-spirited child he wants to tear it apart to see what makes it tick, and the only way he can think of to do that is to literally tear apart the people who feel it. It's the clichés he seems to hate the most: Carl, who's unable to live up to the romantic promises he made, fares much worse than the pragmatic Rod, while when he catches the smitten Robin (Matthew Tennyson) bringing Grace chocolates, he force-feeds them to him. 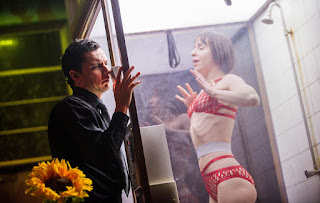 Possibly what confuses Tinker the most are his own feelings for Grace, which he tries to deal with by conflating the real Grace with an unnamed woman (Natalie Klamar) he watches in a peepshow while having a crywank. It's no secret I have a lot of issues with Katie Mitchell's productions, but I find her worth persevering with (especially when she assembles a cast like this) because sometimes she really hits the mark for me, and although it sounds like I'm in a minority this time was one of them: There's certainly an element of her favourite techniques making an appearance - lots of slo-mo walking backwards and weird dance breaks - but they certainly contribute to the eerily nightmarish mood. Her customary murky lighting scheme is probably a mercy this time around to anyone who doesn't want to see the violence too graphically, although that's not to say it doesn't sometimes cause the usual issues - I'd been wondering when Tennyson would appear when I realised he'd been standing bollock-naked on stage for the previous ten minutes and I hadn't recognised him. 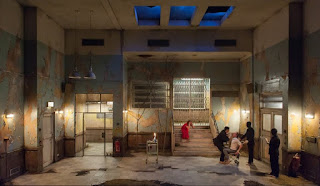 Inaudibility isn't a problem this time, though - in fact during the brief
FULL-FRONTAL MALE NUDITY ALERT!
from Butler, Hobday, Tennyson and Mothersdale, and the more protracted
SEVERE VADGE WARNING!
from Klamar and especially Terry, the radio mic pack is all the actors are wearing. 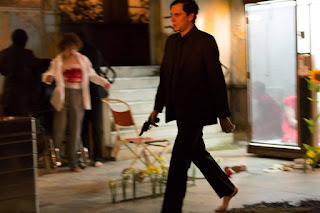 With productions of Cleansed being, inevitably, rare, I don't have another one to compare this to but it didn't seem to me as if Mitchell's techniques were obstructive to what Kane was trying to say. For all the predictable hysteria about walkouts and fainting‡ the body horror on stage is done clinically and, unlike the torture porn films like Saw and Hostel that were popular a few years ago, there's a reasoning behind the violence beyond just doing it for the sake of audience titillation. Actually what I found the most disturbing moment may or may not have been deliberate, in the casting of Tennyson as Robin, a character who (SPOILER ALERT!) hangs himself. It may have been the murky lighting and me being quite far from the stage, but with his choppy haircut he looked remarkably like Kane herself as he reenacted the way the playwright committed suicide the year after this play premiered. 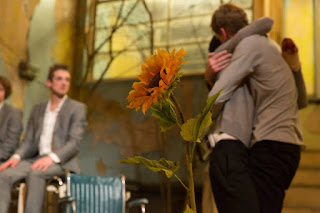 For a play written in 1998 Cleansed also seems prescient about issues of body and gender dysmorphia that are better understood now - Grace's incestuous feelings towards her brother may be less sexual, more about wanting to be in his body. This does, of course also come to a particularly grotesque conclusion but like everything else about the production (and it may be due to me being at the back of the Dorfman rather than up close to the action) I didn't find the violence gratuitous nor the way it's staged as graphic as it's being made out to be. Individually, everything about Cleansed is ugly but the whole is surprisingly, hypnotically beautiful.

Cleansed by Sarah Kane is booking in repertory until the 5th of May at the National Theatre's Dorfman.

*it's also the name of one of the cats in my neighbourhood, but he's probably not named after him. Especially since they got his sex wrong when he was a kitten so it's actually short for Tinkerbell. I'm up to 93% certain the Tinker in Cleansed isn't short for Tinkerbell, although it would explain some of his anger issues.

‡I saw no fainting tonight; there were plenty of walkouts but the majority came back; I suspect the supposed horrified rush for the exits is more down to people not realising they were in for a couple of hours without interval, and needing the loo because they necked too many drinks beforehand, than being offended by the material.
Posted by nick730 at 22:30