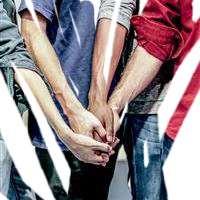 The cliché about gay relationships is that everyone is cheerfully shagging around, so anyone in a more old-fashioned, monogamous pairing might well feel like they're missing out on something. Jake Brunger's Four Play looks at two gay couples in their twenties, a generation that's always had the option of civil partnerships and now marriage, for whom a traditional relationship is as much of an expected option as something a bit kinkier. Rafe (Cai Brigden) and Pete (Michael Gilbert) met at university, came out together and have been a monogamous couple for seven (and a half - it's an important distinction to Rafe) years. It means neither of them has ever slept with anyone else and, although they still insist everything is fine between them, they think a one-off with someone else might be the thing the shake off any seven-year-itch. 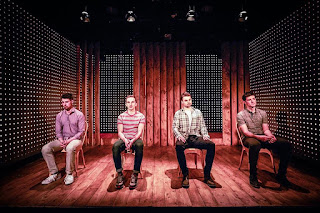 One thing they do ask is that Michael not tell his partner, but before deciding he goes straight to Andrew (Michael James,) as one of the main rules of their arrangement is that they never sleep with anyone they both know. Naturally, the two encounters go ahead; and naturally, the attempt to keep personal feelings out of it fails, and both relationships suffer. 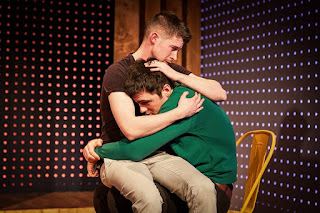 From the opening scene of Rafe trying to explain the plan to Michael it's clear we're in safe comedic hands, Brunger nailing the comedy of awkwardness mixed with excitement. Jonathan O'Boyle's production is slick and maintains the energy from the early comedy through to the later scenes as both relationships start to feel the pressure; though we're seeing a more serious side to the story, Brunger keeps providing comic setpieces to keep the mood light. Although most of the scenes are domestic, Cecilia Carey's set design seems to take inspiration from the couple of moments set in bars and clubs, with disco lights (by Jack Weir) embedded in the walls, changing colour to represent different settings. I also liked the way the light sockets could be used to hang different items around the set (although don't think I didn't notice that the string of lights went up in Michael and Andrew's flat, and came down in Rafe and Pete's.) 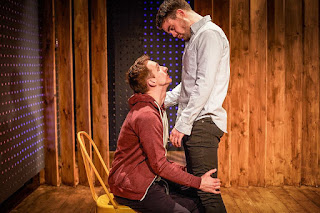 A good-looking cast give believable, distinct personalities to their characters, leaving us invested in the fate of one couple in particular. Hannah is especially good at providing an underlying sweetness to Michael, the most overtly sexually adventurous of the quartet, with a likeable side that persists despite some of the things we find out about him over the course of the play. All in all, Four Play doesn't get much wrong, in a memorably entertaining 90 minutes with a bit of genuine emotion underneath.

Four Play by Jake Brunger is booking until the 12th of March at Theatre 503.