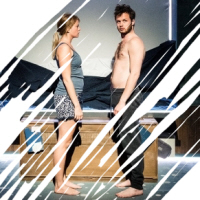 Jack Thorne's enigmatically-titled The Solid Life of Sugar Water is likely to be the last thing I see at the National Theatre's Keith before it gets pulled down, and if so is a strong farewell to The Artist Formerly Known As Shed: Phil (Arthur Hughes) and Alice (Genevieve Barr) are a young married couple describing, in great detail, a rather awkward night of sex. The reason for their discomfort around each other is that this is the first time for them since their first child was stillborn. They're both worried about each other - Phil has noticed it's been a while since his wife last showered, while Alice isn't mentioning the fact that her husband hasn't been eating properly for weeks - but they're not sure how to speak to each other since their child's death. Looking back on both the highlights of their relationship so far, and their recent trauma, if they can get their sex life back on track everything else might follow.

Lily Arnold's set is an upright bed in which the couple open the play, Amit Sharma's production taking the actors out of it as their story expands to take in the rest of their lives. And as we go back to their first meeting and awkward few dates, despite the dark topic at the play's centre The Solid Life of Sugar Water plays out like a romantic comedy for much of the time. Thorne endears the characters to us with the brutally honest, very graphic sex scene that's spoken, not shown; the actors do the rest in creating a relationship that feels real and that - despite now going through a bad patch - you feel confidence in. 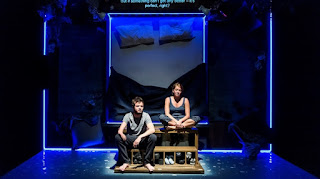 Graeae is a theatre company dedicated to creating opportunities for disabled artists and audiences; captioning is integrated into the show's video design and audio description seems to be available at all performances, but where the cast are concerned Thorne has avoided making that what the play is about. Barr's character is deaf, like the actress (her husband finds it a turn-on because he's always liked "exotic" women) but while Hughes has a disability in his right arm this is never mentioned in the script; the effect is to highlight the universality of the story, the fact that there's nothing different about how a disabled couple respond to this situation than there would be for an able-bodied couple. 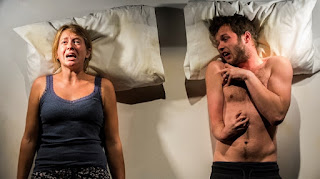 So the overall effect is to put the story and the characters at the forefront as they should be, rather than the disabilities, and as such, viewed from the perspective of the company's mission statement this is an unqualified success. And taken simply as a piece of theatre this is also a hit, presenting an unusually un-romanticised look at parents losing a baby - having to go into labour with a foetus she already knows is dead, Alice talks about having a "spider" inside her, while neither parent wants to hold the body. But the overall feeling is a positive one, of a well-matched, genuinely caring couple with funny stories to tell, and a relationship that'll survive their current problems.

The Solid Life of Sugar Water by Jack Thorne is booking until the 19th of March at the National Theatre's Keith.