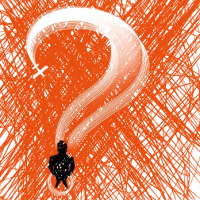 The Donmar's latest season opens in high spirits with Anthony Weigh's new version of Jean Anouilh's Le Voyageur Sans Bagage, relocated to New York State in 1959 as Welcome Home, Captain Fox! Among her various charitable projects, aspiring socialite Marcee DuPont-DuFort (Katherine Kingsley) discovers Gene (Rory Keenan,) a WWII veteran in a military mental hospital, who doesn't remember anything before he woke up in in a French battlefield 15 years earlier. The wealthy Hamptons matriarch Mrs Fox (Sian Thomas) had a son who went MIA around that time, and Marcee is convinced she's found a match - and one that could get her a few rungs up the social ladder. Mrs Fox and her eldest son George (Barnaby Kay) are skeptical at first, but as soon as they see Gene they're convinced he's the missing Jack. But being in what he's told is his childhood home doesn't prompt any memories to come back, and he's not sure if he wants them to.

Because Gene is an all-American good guy whose experiences have made him want to treat people right and, the more he learns about his former identity, the less he likes him. 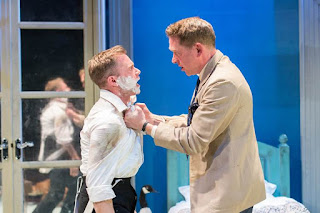 It turns out Jack was a gambler whose family are still paying back his debts, who mistreated the butler James (Trevor Laird) and had affairs with the maid Juliette (Michelle Asante) and George's wife Valerie (Fenella Woolgar.) Weigh's play is a witty look at privilege and second chances, and Blanche McIntyre's production has the feel of a classic screwball comedy - particularly in Keenan's performance, with its perfect delivery of the rapid-fire speech of those films' earnest leading men. 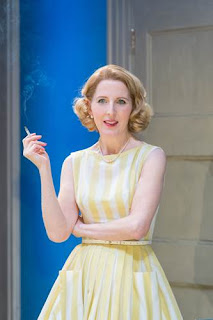 The whole cast delivers, but there are especially good moments for Asante as Juliette hopes to resurrect their fling; and when alternative candidates for Gene's true identity appear, Woolgar gets a great speech full of clichés about the lowlifes who could take him home instead, as she gets increasingly hysterical at the thought of losing Jack a second time. Meanwhile Danny Webb steals every scene he's in as Marcee's distinctly unimpressed husband De Wit DuPont-DuFort. 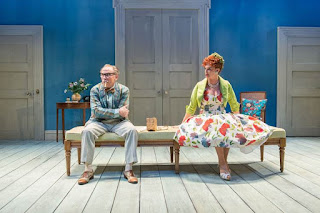 The play opens with a doctor (Daniel York) examining Gene's memory, and though the audience (if not always the characters) know who's who by the end, there's still a bit of a question mark over whether Gene might have faked his amnesia to escape who he used to be. There's some moving moments in among the comedy and apart from the first act feeling slightly overlong, the two-and-a-half hours go by remarkably quickly.

Welcome Home, Captain Fox! (Le Voyager Sans Bagage) by Jean Anouilh in a version by Anthony Weigh is booking until the 16th of April at the Donmar Warehouse.