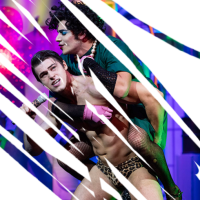 I toyed with calling this a "non-review," my term for when I don't feel qualified to pass comment on something (usually because I didn't stay to the end.) In this instance it wouldn't have been because of me but because Richard O'Brien's The Rocky Horror Show has gone beyond anything that can actually be reviewed, into a surreal immersive experience where most of the audience know the script better than the cast do. In fact I've never seen the show on stage before, although I have seen the film; Christopher Luscombe’s production seems to be almost permanently touring the country so I always figured there'd be another chance to catch it. But after seeing the obscure sequel Shock Treatment last year it seemed about time for a visit to the famous original, in which newly-engaged couple Brad (arsehole) (Ben Freeman) and Janet’s (slut) (Diana Vickers) car breaks down and they go to a spooky mansion to see if they have a phone they can use (they don't.)

This is where pansexual transvestite mad scientist Frank N Furter (Liam Tamne) is about to reveal his latest creation, Rocky Horror (Dominic Andersen,) a barely-clothed, perfect male specimen he plans to use as his boy-toy. 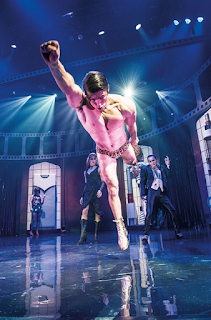 But Rocky has (half) a mind of his own and is far more interested in Janet (slut) than he is in his master. Being an affectionate spoof/homage to B movies, The Rocky Horror Show’s plot is best not dwelt on in too much detail, and in the superior first act at least its ridiculousness helps paper over any cracks. The main cast also includes Kay Murphy as Magenta and Sophie Linder-Lee as Columbia, while Kristian Lavercombe has been playing Riff Raff for years in productions around the world – which may explain why his first appearance got the biggest cheer from the audience of regulars. 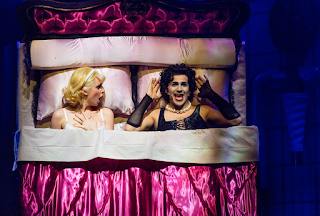 And this is where the show becomes impossible to review in the usual sense, as over the decades a tradition of audience interaction has built up, with much of the crowd dressing up as the characters, and calling out throughout the show - there’s a number of "official" responses that have built up over the years, like the heckles that greet every mention of Brad (arsehole) or Janet’s (slut) names, while the bolder/drunker audience members try out gags of their own, which usually get rebuffed by the Narrator: This role tends to be alternated by various guest stars on tour, and anyone who’s ever been to Wimbledon will be unsurprised to hear that for this leg it’s Steve Punt (with Carlie Condou and Norman Pace doing the honours elsewhere on tour) so tonight’s heckles included slagging off The Now Show. 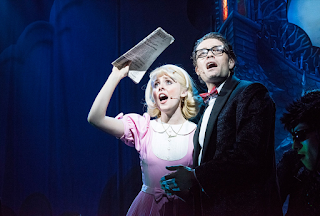 As with the film, I found that the second act is a real let-down; the plot gets particularly messy, which probably wouldn’t matter except the show’s very front-loaded, with almost all the best songs – including “Dammit Janet,” “The Time Warp,” “Over at the Frankenstein Place” and “Sweet Transvestite” – in the first half, while with the exception of "Touch-a, Touch-a, Touch-a, Touch Me" the second is largely ballads I’ve never liked much. But notwithstanding the weaknesses of the show itself, the cast do sterling work with its strengths, and it’s probably fair to say there isn’t really a show quite like it.

The Rocky Horror Show by Richard O’Brien is booking until the 5th of March at the New Wimbledon Theatre; then continuing on tour to Torquay, Bradford, Edinburgh, York, Aylesbury, Richmond, Stoke-on-Trent, Woking, Bristol, Milton Keynes, Glasgow, Oxford and Birmingham.