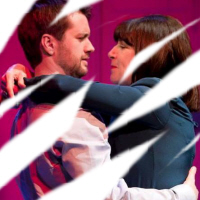 You'd expect French Canadians to basically be like regular Canadians with added baguettes, but if Québécois playwright Catherine-Anne Toupin's Right Now is anything to go by, just speaking the language seems to inspire the kind of theatrical mindfuck favoured by French writers like Florian Zeller. Alice (Lindsey Campbell) and Ben (Sean Biggerstaff) are a young couple who've been living in their flat for about six months; they seem settled enough but there's an underlying awkwardness, and the occasional sound of a crying baby that only Alice can hear is a pretty big clue to the cause of the tension. The sense of walking on eggshells is smashed when the neighbours across the hall decide to introduce themselves - Juliette (Maureen Beattie,) her husband Gilles (Guy Williams) and son François (Dyfan Dwyfor) are soon inviting themselves round and making themselves more than comfortable.

In fact the older couple flirt pretty aggressively with the younger one, but Juliette also seems to have maternal feelings for Ben, who shares the name of a son she lost (and whom she liked better than François.) 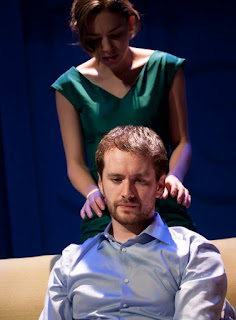 One thing Toupin's play, in Chris Campbell's translation and Michael Boyd's production, does very well is veer between almost farcical comedy and a genuine creepiness, without either being diminished: So the neighbours' odd behaviour, which puts Alice on edge but Ben quickly seems to accept as normal, often has a sexually threatening edge, but it balances out with the comically bizarre in scenes like Juliette's insistence that Ben kneel down and see what colour underwear she's wearing. 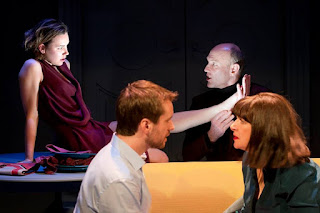 Beattie and Williams provide comic grotesques - she an exaggerated Mrs Robinson, he suave to the point of caricature - which show us how easily they could overwhelm Biggerstaff's weary doctor Ben and Campbell's mentally exhausted Alice. Meanwhile Boyd has continued to work regularly with Dwyfor long after his EnsembleTM days, and here gives him probably his best role yet: François is a twitchy man-child, his intentions towards Alice are seemingly sinister but he's too ineffectual to come across as a threat, so he perfectly encapsulates the play's unusually successful mix of high comedy and brooding menace. 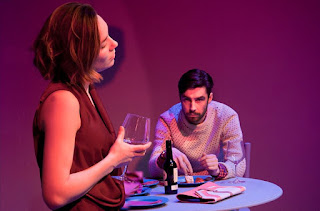 This mood does falter towards the end: The way everyone ends up getting exactly what they want in a rather screwed-up way suggests either a supernatural twist, or that Alice's mind has been much more fractured all along than we thought; and neither possibility has had the groundwork laid down for it. But Boyd copes with the wobbly ending with a little coup de théâtre (and in the context it's a very apt use of this particular surprise) and for the most part Right Now's weird little world is a memorable one to visit - but you wouldn't want to live there, who knows who might come knocking?

Right Now by Catherine-Anne Toupin in a version by Chris Campbell is booking until the 16th of April at the Bush Theatre.