Theatre review: I See You 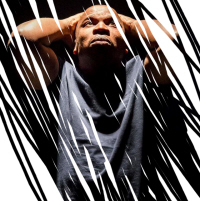 It must be a strange time to be Noma Dumezweni; a couple of months ago she was stepping into a lead role with zero notice, and she's another couple of months away from a potentially career-changing (and joyously Mail-annoying) role in Harry Potter. Her job between the two is positively low-key in comparison, but would be the high point of most people's year - she steps from centre stage to behind the scenes for her directorial debut (this interview suggests she basically says yes to offers first and worries about how she'll pull it off later.) You can see why the Royal Court would think of her for South African playwright Mongiwekhaya's (one name, like Cher) I See You: Dumezweni's family left South Africa when she was a child to flee Apartheid, and that's also what Ben's (Bayo Gbadamosi) family did when he was three years old. But now that he's 19 Ben's returned to study Law in a country that's no longer a war zone; or so he thinks, but for Officer Buthelezi (Desmond Dube) there's still a war going on, and Ben's the enemy.

When Ben and his new friend Skinn (one name, like Cher) (Jordan Baker) get pulled over by Buthelezi and his partner Masinga (Sibusiso Mamba) on suspicion of drink driving, Buthelezi decides to take out his frustrations on the younger man. 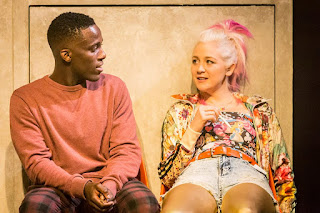 The title is styled on the poster and website as I See You / Ngiyakubona / Ek Sien Jou / Ndiyakubona, i.e. in South Africa's main languages of English, Zulu, Afrikaans and Xhosa, because both names and language are crucial in Mongiwekhaya's play. Xhosa was Ben's first language, but after moving away he can only speak English, and both Skinn's attempts to speak to him in Afrikaans and Buthelezi's to use Zulu meet with a blank: The policemen's refusal to translate a form he has to sign lead to some pretty dire consequences for Ben, and his inability to speak any African languages is what pushes Buthelezi over the edge. 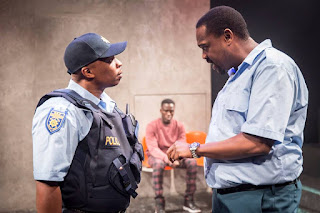 Mongiwekhaya's short and sharp style effectively presents two very different sides of South Africa, a generation that never directly experienced Apartheid versus one that fought against it and, in this instance at least, didn't quite reap the hoped-for rewards when it was overturned. Dumezweni's directing debut is notable particularly for the tension she creates - although there's very little actual violence, Dube projects a sense of menace that makes you genuinely concerned for the - rather smug, but essentially decent - young student. 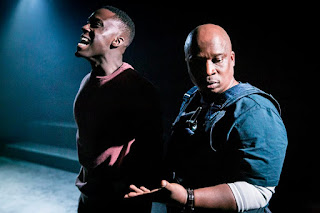 Soutra Gilmour provides a thrust set with the feel of a mini-stadium, with custom-built benches (unlike most times this happens, they're actually a bit more comfortable than the usual Upstairs seating) which adds to the feel of the modern face of Africa being confronted by something more primal. The play's resolution depends a bit too much on Ben developing a bit of a messiah complex - and anyone behaving in a messianic way in this particular venue is going to give me horrible flashbacks. Also, a subplot featuring Skinn's ex-boyfriend (pimp?) James (Austin Hardiman) doesn't feel entirely developed, but the thread of the white girl searching for her black friend gives a positive counterpoint to the way the policeman sees the modern South Africa as a betrayal. Described as being "based on a real encounter," I See You is a short and powerful trip into a world that's not yet quite reconciled its past with its present.

I See You by Mongiwekhaya is booking until the 26th of March at the Royal Court's Jerwood Theatre Upstairs; then continuing on tour to Johannesburg.