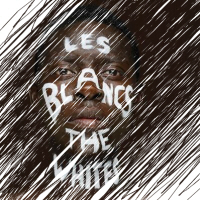 It was left unfinished on playwright Lorraine Hansberry's death, but the National saw enough merit in Les Blancs to get adaptor Robert Nemiroff and director Yaël Farber to create a stageable version of this African epic: In an unspecified post-war, colonial African country, a European mission operates a very basic hospital. The influential pastor is unseen, off on some apparently regular trek into the jungle, but his blind wife Madame Neilsen (Siân Phillips) is there to meet American journalist Charlie Morris (Elliot Cowan,) there in search of the real story of a country whose decades of foreign rule have finally led to increasing black-on-white violence. Not satisfied with only getting the white side of the story, he focuses on a trio of brothers, all of whom are outsiders in some way, who've returned to the area for their father's funeral; particularly middle brother Tshembe (Danny Sapani,) who's spent years travelling the world and has a white wife in London.

Meanwhile oldest brother Abioseh (Gary Beadle) is studying to become a priest, while the youngest, Eric (Tunji Kasim,) is only their half-brother, his real father being a white man whose identity is an open secret. 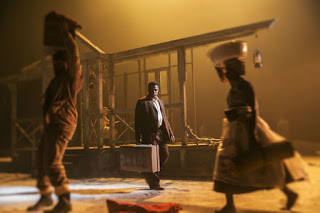 Central to the story is Tshembe and the way his world-view is turned upside down; his experience of the world has left him cynical, not so much about the way white men treat black men, but about the way all men treat each other. But what he thought he knew about his own family is challenged when, unconvinced that the current violence is the right way to get independence, he discovers that his father was a leader of the terrorist faction. 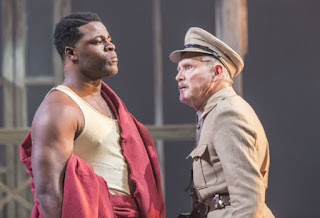 I don't know what it was about Soutra Gilmour's set, a sliver of a rickety wooden building in the middle of the revolve, that made me think of Chekhov, but there are moments when the play does feel reminiscent of his work, in the scenes of people in a position of privilege who can't quite fathom why it should be at risk, and in the contrasting characters of the two doctors, Anna Madeley's Marta, well-meaning enough but blindly accepting the official line that Africans don't want anything better than the basic services they provide, and Willy (James Fleet,) a cynic who stays at the mission to do what he can but knows he's more like part of the problem. 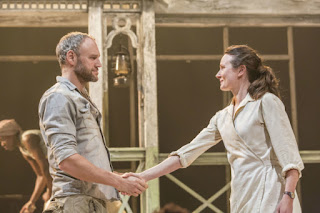 What gives the play its epic sweep is the way it presents this little world next to the reality for the natives, as experienced by Tshembe in his return from the wider world. He soon gets on the wrong side of the establishment in the form of sweaty racist Major Rice (Clive Francis,) while he has little time for Morris' facile line of questioning (that he keeps trying to defend as not being the usual facile line of questioning.) Meanwhile along with the traditional music played by a quartet of matriarchs, Farber adds atmosphere to the production with the presence of an unnamed tribal woman (Sheila Atim,) who stalks the stage like a leopard, possibly representing some kind of spirit of the country itself - as Rice's retaliation against the rebels gets harsher, she seems to become ill along with the country (I don't know if this character is an invention of the production, perhaps added because of the odd lack of black women in the story?) 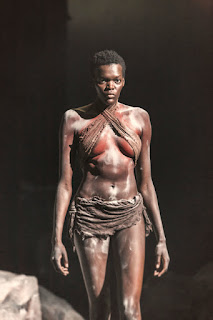 Judging by the running time on the cast sheet, the production originally looked like it would come in at three-and-a-half hours, of which Farber has fortunately trimmed things down by just over half an hour. It's still long but doesn't particularly feel it, and even if the ending doesn't feel entirely satisfying it's the only point where the fact that they're working from an unfinished script is ever really apparent; a strong cast and atmospheric production make this a rediscovery well worth putting on the National's biggest stage.

Les Blancs by Lorraine Hansberry with adaptations by Robert Nemiroff is booking in repertory until the 2nd of June at the National Theatre's Olivier.