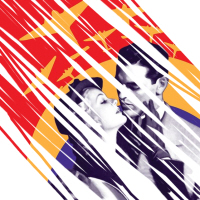 Ernest Hemingway wasn't really known as a playwright; for much the same reason, it turns out, as Eric Pickles isn't really known as a rhythmic gymnast. His only play, The Fifth Column, takes place where it was written, in the only two rooms of the Hotel Florida to be sheltered from bombing, in Madrid during the Spanish Civil War. Preston (Michael Shelford) and Dorothy (Alix Dunmore) are American war reporters but Rawlings (Simon Darwen) is only posing as one - he's actually a spy working for the International Brigades, and has dangerous suspects locked away in various other rooms of the hotel, although a sleepy soldier (James El-Sharawy) keeps letting them escape, at which point they invariably try to kill Rawlings. Despite this the play very quickly lost my interest; I can't call this a review as I only saw the first act.

The trouble is that despite bombs going off outside the hotel and assassination attempts inside it, Hemingway is more interested in showing us Rawlings - a gruff, hard-drinking author substitute - lounging with Dorothy and stealing her from under Preston's nose for the first half hour. This also leads Anita (Sasha Frost,) delightfully described in the character notes as "a Moorish tart," to go off on many a possessive rant at him for choosing the blonde over her. 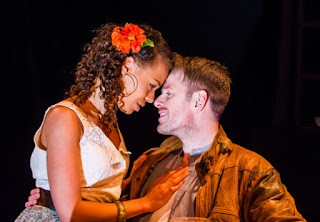 Even as the real reason he's there starts to be teased out of the story, the script has no life in it, and despite a charming turn from Darwen to balance out the unlikeable lead, Tricia Thorns' production doesn't convince that Hemingway's play hasn't languished in obscurity for good reason. Perhaps the second act would have revealed intrigues that redeemed the play but I wasn't convinced enough to risk it, and cut my losses at the interval.

The Fifth Column by Ernest Hemingway is booking until the 16th of April at Southwark Playhouse's Large Theatre.