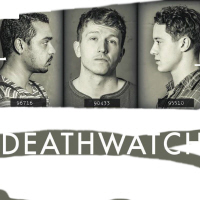 The Print Room has now opened what is presumably going to be its main house in the former Coronet cinema: It's what would have been the balcony, with a new floor put in, and the original stalls converted into a bar (the design of which has really embraced the "serial killer's lair" theme of a building with dolls nailed to the bathroom doors.) The fact that the theatre's surroundings are the dilapidated red walls of an old cinema, meanwhile, is a theme that Lee Newby's design has run with, turning the pit into a circus-like stage, with a cage in the middle of the sawdust. It's people, not tigers we'll be watching perform as Geraldine Alexander directs Deathwatch, Jean Genet's play inspired by his own time in prison. The cell is shared by three men and, as the play opens, Lefranc (Danny Lee Wynter) is trying to throttle his cellmate Maurice (Joseph Quinn.)

Their fight is broken up by Green-Eyes (Tom Varey,) the likely reason they've been fighting in the first place. 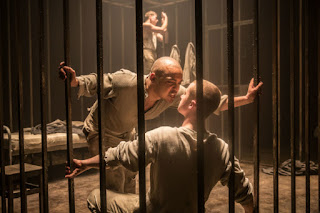 Because while the other two men's crimes aren't revealed, Green-Eyes is a murderer. In the prison hierarchy this puts him second only to an enormous African killer nicknamed Snowball, and so his cellmates vie for his attention, with the queeny Maurice gleefully undermining Lefranc's friendship with Green-Eyes. 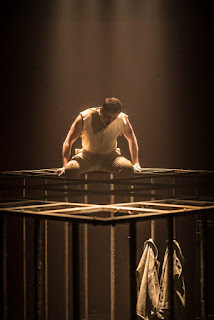 There's a heavily homoerotic tone to the three-way relationship, one which Green-Eyes misinterprets as being about the picture of his wife he has tattooed on his chest, and as such a lot of the early conversation revolves around her. He variously bequeaths her to his cellmates, or asks them to kill her so nobody else can have her when he's gone - but with Green-Eyes facing the guillotine in a couple of months' time, the others are already concerned with getting into Snowball's favour next. So Deathwatch has at times an interesting take on the twisted power dynamic within prison walls. 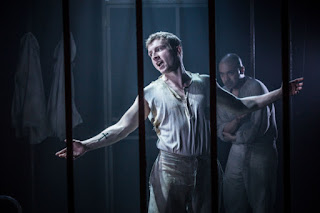 Despite its short running time though, its dialogue which repeats and twists in on itself sometimes struggled to hold my attention - between this and The Maids I'm not sure I necessarily connect with Genet and what he's trying to say. But there's no denying a trio of excellent performances from a quietly scheming Lefranc in Wynter, contrasting with the slippery attention-seeking of Quinn's Maurice, and a broodingly charismatic Varey in the middle.

Deathwatch by Jean Genet in a version by David Rudkin is booking until the 7th of May at the Print Room.