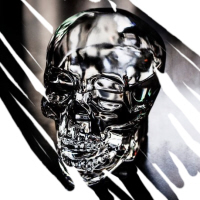 A few duff Hamlets in recent years haven't quite shaken my belief that Shakespeare's best-loved play deserves its reputation if only because of how infinitely adaptable it can be; but it always helps to have a great production come along and justify my faith in what is probably the play I've seen more times than any other. The latest RSC Hamlet is a particularly stark contrast to their last one three years ago: Where David Farr's production was intellectual, clinical, relentlessly bleak and ultimately dull, Simon Godwin's new take is playful, emotional and colourful - literally so in Paul Wills' design, as Paapa Essiedu's Hamlet expresses his "antic disposition" with furious, expressive and very messy painting.

One of the starting points of Godwin's production is the idea of the rich sending their children away to study and see the world - but when they return the place they grew up in seems small compared to the world they've seen. 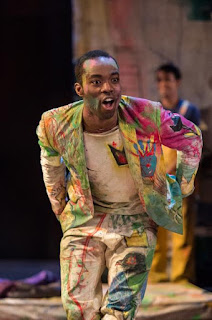 So we open with Prince Hamlet's graduation from Wittenberg, but it's not just the return home that causes him upset, as he comes back to a dead father, and an uncle who's taken his brother's throne as well as his queen. When his father's ghost (the suitably silken-voiced Ewart James Walters) informs him that he was murdered, Hamlet now also has to take revenge on the usurping Claudius. This version of Denmark is an African nation, Clarence Smith's Claudius a military dictator but one who initially betrays nothing of how he got his throne - he has no animosity towards his nephew until he realises he knows the truth. 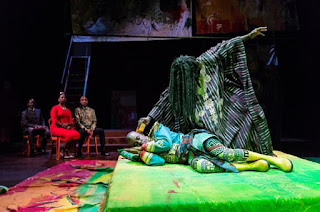 Tanya Moodie's Gertrude is far from an innocent in this world: Imperious from start to finish, she clearly enjoys being queen and didn't need any convincing to remarry; she's a Gertrude we wouldn't be particularly surprised to find out had been in on her first husband's murder. There's other interesting interpretations in the puppyish enthusiasm of Hiran Abeysekera's Horatio, while Rosencrantz (James Cooney) and Guildenstern (Bethan Cullinane) are nicely-observed, hipstery traveller types (weird to have the "not knowing which is which" gag when one of them's a woman, though.) 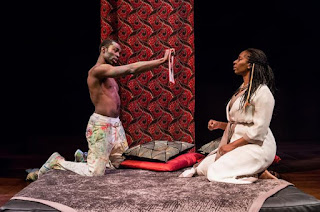 Of course any production of Hamlet will take its cues from its leading man and, (in another contrast to the last RSC production and the oldest prince I've seen so far,) Essiedu is a properly young one, not just in age but in outlook, one who can swear revenge but hasn't lived in a world where that kind of blood-feud is a reality for a long time, so is unequipped to carry it out. Hence his prevaricating; while his madness isn't real, his anger and confusion are, leading to an enjoyably varied performance. The fact that he's not really ready for this sort of responsibility means that his impish sense of humour isn't something he can supress - the Hamlets who take advantage of just how funny he can be are always my favourites, and the most painful ones to lose at the climax. 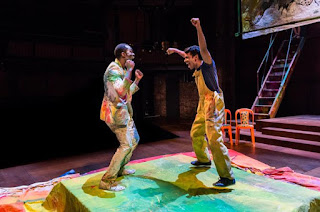 But Godwin hasn't let a charismatic lead do all the work, and what makes the production so joyous is the amount of inventiveness throughout. Some, like the ominous drumming that accompanies the Ghost's appearance, or the rag-tag Players whose King's (Kevin N Golding) crown is made of Sprite cans, is obviously inspired by the African setting, but most would be interesting anywhere: Cyril Nri's Polonius pitches the comedy and tediousness of his speechifying just right, and another strong comic moment comes when Walters returns as the singing, dancing, irreverent Gravedigger, using bones as a mic to try out his standup gags. 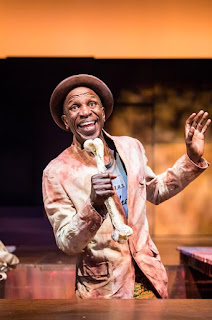 Not that the tragedy isn't served as well; Natalie Simpson brings to the fore the way the virginal Ophelia's madness takes a bluntly sexual turn, and later rips out her own hair to present to the royals as rosemary and rue. The final fencing match becomes a dance-like fight with sticks, Laertes' (Marcus Griffiths) hiding a nasty surprise. And Godwin chooses to take the interval at the same point as Greg Doran did for the David Tennant/Ed Bennett Hamlet, midway through Hamlet's attempt to kill Claudius at prayer. For my money it worked better here, both the cliffhanger's thriller-like effect, and the comic anti-climax that fits in with the mischievous tone. 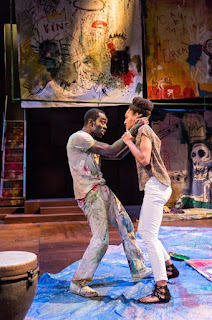 Whether it was the lightness of touch, the overall inventiveness or the attention to detail (I know from Rosencrantz's luggage tag that his first name starts with J and he lives lived in London SE15,) this was a production that kept me smiling throughout its long running time, my favourite Hamlet in a long while.

Hamlet by William Shakespeare is booking in repertory until the 13th of August at the Royal Shakespeare Theatre, Stratford-upon-Avon.