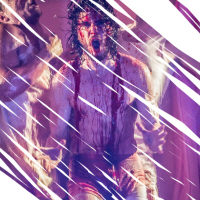 Doctor Faustus' charmed 24 years on earth seem to pass him by in a matter of seconds, a process that Jamie Lloyd's production has cunningly reversed for the audience. Christopher "Kit" Marlowe's anti-hero is an academic, frustrated by the limits of human knowledge and willing to sell his soul to find out the secrets of the universe. He conjures the fallen angel Mephistopheles (Jenna Russell) to do the deal: She will serve Faustus for 24 years, after which he will spend eternity in Hell - a deal he makes flippantly since he doesn't actually believe in Hell (despite having a conversation with an actual demon at the time.) But this isn't quite Marlowe's version of the play: Lloyd uses a text that replaces the middle two acts, in which Faustus travels the world using his magic powers to expose the corrupt and impress the powerful, with a completely new script by Colin Teevan in which Faustus (Kit "Christopher" Harington) becomes a Vegas magician.

For the Marlowe acts, Soutra Gilmour's set is domestic, a one-bedroom apartment in which Faustus stares at the TV in boredom until coming up with the idea of searching the internet for a way to summon a demon. 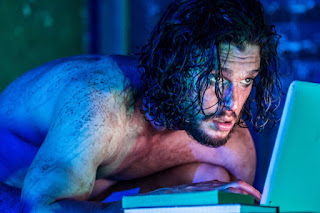 There's a strong idea behind this gloomy claustrophobic tone, as the gifts Mephistopheles gives Faustus are even more illusory than usual: The book that contains all fields of knowledge turns out to really be a copy of Hello magazine, and for a while it looks like Faustus might rot away his whole 24 years, believing he's seen the universe when he's never left his flat. As with so much about the production though, it needs a stronger leading man to carry this off, and Harington's trademark woobie face isn't up to the job of providing that kind of variety. 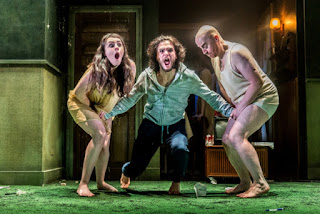 But much of what makes Lloyd's production so problematic comes down to his ideas being so muddled: Inspired by Mephistopheles' regular assertion that Hell is everywhere, so are the damned, who haunt the set like junkies in grubby underwear from the start. But then when Faustus consults Valdes and Cornelius, they arrive as a pair of naked zombie-like characters, with a
FULL-FRONTAL MALE NUDITY ALERT
from Brian Gilligan and
SEVERE VADGE WARNING
from Danielle Flett - are they just demons pretending to be scholars? Lloyd gives greater prominence to Lucifer in this version, Forbes Masson playing him as a Leigh Bowery-inspired, overgrown sinister baby. But the biggest muddle of ideas comes in the production's tone, with it never being clear to what extent it's taking the piss out of itself - meaning it fails to be either properly dramatic or properly funny, and things like having Faustus rape Helen of Troy just become exploitative. 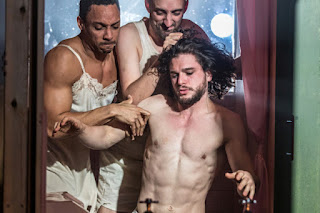 And then there's Teevan's new middle section, with the set pulling itself apart as the play attempts to turn into a satire on celebrity; Faustus has become the world's biggest magician, although how he does this in 2016 with tricks like levitating an assistant is one of the show's bigger mysteries: He seems to have essentially sold his soul in exchange for the powers of Ali Bongo. His way of showing he enjoys his fame is a cringe-inducing tendency to play air guitar, the play reduces the reasons for his damnation to childhood trauma like it's an episode of The Ricki Lake Show, and there's a cheesy moral that he should have chosen true love with Jade Anouka's Wagner instead. 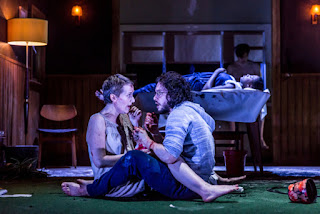 If the leading man has spent more time in the gym than in acting classes, there's strong performances elsewhere, with Anouka moving despite being stuck in a melodrama, Tom Edden getting a scene-stealing moment as all seven of the Deadly Sins, and of course Russell as a variously funny and plaintive Mephistopheles - it doesn't say too much about the production that its highlight is probably her karaoke of demonically-themed pop songs ("Better The Devil You Know," "Devil Woman," "Bat Out of Hell" for the finale) at the interval. If you'd told me a Jamie Lloyd production filled with skin and gore would actually bore me I'd have doubted you, but here we are.

Doctor Faustus by Christopher Marlowe with additional material by Colin Teevan is booking until the 25th of June at the Duke of York's Theatre.