Theatre review: The Sugar-Coated Bullets of the Bourgeoisie 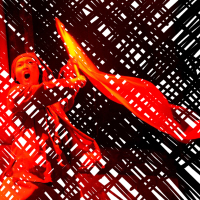 Having studied China and the Chinese language for much of his life, political playwright Anders Lustgarten finally turns to it as the subject for a play in The Sugar-Coated Bullets of the Bourgeoisie - named after a quote from a Chairman Mao speech. It's a history of China in microcosm from 1949 to the present day in the village of Rotten Peach, beginning with Party representatives Xu (Andrew Leung) and Tang (Louise Mai Newberry) arriving to tell the peasants they have to put the local landlord Zhang (Siu Hun Li) on trial. Zhang is confident they'll fear change as much as ever and vote to let him keep everything, but events take a sudden and violent turn, leading to Rotten Peach becoming a model co-operative and enjoying a few years of high productivity before things start to go wrong.

Prompted by reports of implausibly high yields from neigbouring areas, the authorities demand greater and greater deliveries of crops from the village, leaving the people starving again. 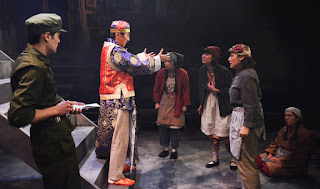 The second act brings us right up to 2016, when the descendants of the original villagers face a new generation of authority figures trying to rip them off as China's own version of capitalism takes hold. Designer Lily Arnold is one of the stars of Steven Atkinson's production, both with an impressive set that takes in the whole of the awkward Arcola 1 space and contrasts wooden buildings with the bright lights of modern China; and with costume designs that reflect the connections between the characters over the decades. 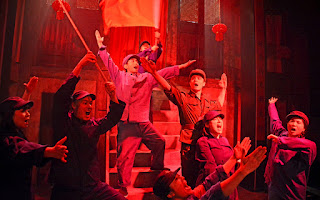 The Sugar-Coated Bullets of the Bourgeoisie is also a play that's strong on the importance of women in its story: Female cast members outnumber the men five to three, and the position of women in society before the Cultural Revolution is suggested to be a major reason for its success: While the men, led by Stocky Jiao (Stephen Hoo) are happy to keep the status quo in return for the odd kickback, it's the women listing their abuse at Zhang's hands, and the revelation he's the father of the illegitimate Horseface (Rebecca Boey,) that sees him taken down. Bridging across the story from the arrival of the Xu Tang clan when she was a young girl, to still living in Rotten Peach as an old lady in 2016 is the idealistic Lotus Blossom (Anna Leong Brophy,) while Newberry's straight-talking cockney Tang is a highlight. 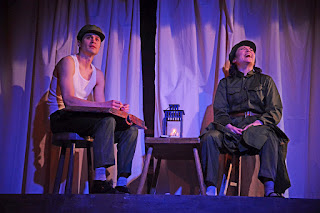 Lustgarten's point is to bring China to life as a complex and three-dimensional place rather than as a human rights-abusing bogeyman ("China is the mirror in which the West looks for reassurance she is beautiful.") Despite the often brutal story the play does this with a lot of humour, including a surreal face-off in a modern-day scene of Chairman Mao lookalikes arguing over whether he had a Scottish, Lancashire or Geordie accent (obviously it was Scottish,) and although at times it tries to cram in too many themes (a lesbian twist comes out of nowhere) is largely successful in creating a fascinating and different portrait of a nation.

The Sugar-Coated Bullets of the Bourgeoisie by Anders Lustgarten is booking until the 30th of April at Arcola Studio 1, then from the 8th to the 18th of September at Hightide Festival.