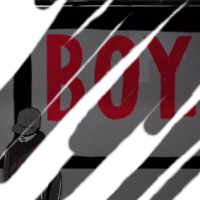 Last year director Sacha Wares and set designer Miriam Buether transformed the Almeida for Game, the design becoming the clear star of a show that would have floundered without it. Leo Butler's Boy fills its hour-and-a-quarter a lot more confidently in its own right than Mike Bartlett's play did, but there's no denying the cleverness of the staging is one of the things that stands out - possibly, at times, to the detriment of the script. Liam (Frankie Fox) is 17 and, as the publicity describes him, "a boy at a bus stop, easily missed." For the audience he's the focal point of the 75 minutes, but for everyone else on the stage with him he might as well be invisible, except at those times where they're going out of their way to ignore or dismiss him. Boy opens with him visiting a doctor (Wendy Kweh,) with a concern he's too inarticulate to express, so she can't find anything physically wrong with him.

With no medical answer for what's worrying him, Liam goes on a 24-hour journey around London trying to figure out where he's supposed to be, but answers prove no easier to find. Boy is a constant stream of people (a cast including Sarah Niles*, Abdul Salis and Matthew Wellard play numerous roles, quick-changing costumes by Ultz,) trying to get through their day with as little contact with Liam as possible, and as such Buether, never a designer afraid of a travelator, has reconfigured the auditorium to have the audience surround a constantly revolving one, moving the actors around in twists and turns like a giant sushi conveyor belt, with stagehands fluidly adding and removing doors, bus stops and turnstiles. 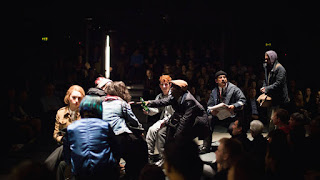 Fox, with a couple of TV shows and ads under his belt but making his stage debut, is impressive at holding the audience's attention and sympathy as the lost boy, who despite living in South London - and presumably having done so all his life - is ghettoised there, his attempt to get to Oxford Street seeming as epic a journey into the unknown as Christopher's in The Curious Incident. Having left school but not old enough to go on the dole yet, he's left in a limbo where the only suggestion of how to find work is volunteering and courses - but a drug dealer's (Mohammad Amiri) rant about that being a way to get unpaid work from young people then dismiss them puts the lie to that as an option. The way Boy is staged is so slick and clever, it can prove distracting - as well as the sushi conveyor belt, the actors regularly sit on chairs that aren't there. The trick is presumably related to the way the latest crop of living statues in the West End sit on thin air - you can hear the thunk as the actors hook their shoes onto the travelator before sitting down, and at times a brace is visible through their trousers that presumably is what locks in place to support them. Then there's the bank of Sainsbury's self-checkouts stocked with pre-5p charge plastic carrier bags (is this a period piece set last summer?) and the West End represented by spinning Billy Elliot posters, making the reference instantly outdated as Boy opens just as that show closes†. 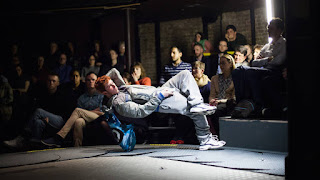 So given the amount of sound and fury in Wares' production it's impressive that Boy manages to succeed in bringing the lead's quiet despair to the fore. There's a couple of really heartbreaking moments - after the boy spends much of his day trying to find an old school friend, when he finally does it becomes quickly obvious that not only has the friend moved on, but that he always bullied Liam at school in the first place. I was worried that the story was heading towards Liam becoming the kind of criminal everyone sees when they look at him, but with his next trip to the doctor (this time played by Peter Temple, because you never see the same doctor twice,) Boy concludes its look at the role of the young in austerity Britain in a more subtly devastating way.

Boy by Leo Butler is booking until the 28th of May at the Almeida Theatre.

†although to be fair I'm sure we'll be seeing those posters gathering dust around London for the next decade
Posted by nick730 at 22:00