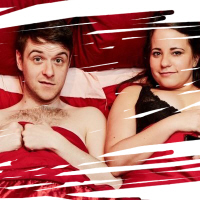 A low-key trend in recent years, but one that's resulted in more than its fair share of interesting theatre, has been the idea of not just making shows accessible to audiences with disabilities, but also integrating these accessibility aids into the structure of the show itself. Deafinitely went from a company that created sign-language shows to one aiming to make theatre that deaf and hearing people could enjoy equally together; while only a few months ago Graeae brought The Solid Life of Sugar Water to London, with audio-description at every performance, and surtitles integrated into the projections. It's the latter show's technique, as well as its wincingly frank sex talk, that comes to mind in Johnny McKnight's Wendy Hoose, in which Jake (James Young) answers a booty call on Tinder and goes to meet Laura (Amy Conachan) in her flat, where she's already in bed waiting for him.

What Jake doesn't know until he gets in with her is that Laura was born without legs, and gets around by walking on her hands when she's not in her wheelchair. 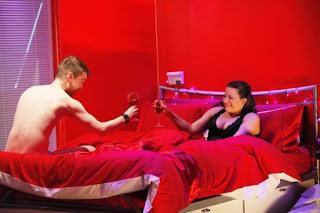 McKnight's play, which he co-directs with Robert Softley Gale, goes straight for the laughs as Jake strips off and makes an awkward attempt at the dirty talk Laura wants, before their night gets derailed by him discovering her disability. Trying to explain why he's no longer attracted to her without being offensive, he of course only digs himself into deeper holes; but when the familiar plot device of the minicab that won't be there for another 40 minutes crops up, the two have to spend enough time together to realise they might actually like each other. 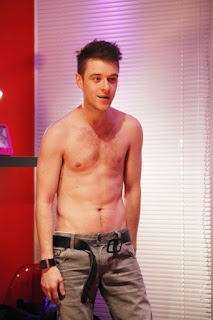 There's a few rather contrived plot points like this (Laura has to have thought of a better way to let people find out about her disability by now, never mind thinking that Jake going to the bathroom was the perfect time to bring out her vibrator without being caught,) but Wendy Hoose and its stars are charming enough for this not to matter too much, and it makes for a short, sweet look at preconceptions (on both sides) and the awkwardness behind brash online personas. And then there's the accessible elements, which far from being cold and functional, become a major part of the show's personality. 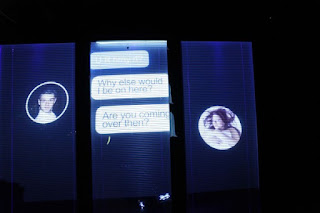 Rather than being on headphones for the blind, the audio description is audible to all, with a female voice not just narrating the action but passing judgement on the characters, utterly disgusted by the way Laura eats a Creme Egg, and turned off by Jake's body (we'll have to agree to disagree on that one, voiceover lady.) Meanwhile the surtitles are filled with emoticons and animation, and the sign language interpreter on a screen gets a Creme Egg of her own. We might live in a time of the disabled being demonised and disenfranchised by the government, but in theatre at least people with disabilities are not only visible, but helping create shows that wouldn't exist without a slightly different view of the world and, like this one, end up the richer for it.

Wendy Hoose by Johnny McKnight is booking until the 7th of May at Soho Theatre.