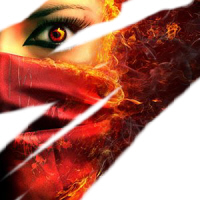 It's a little over five years since I saw a rehearsed reading of Phil Willmott's musical (songs co-composed with Mark Collins,) Princess Caraboo, as part of a Vibrant season at the Finborough, and I guess it's true what they say about the time it takes to develop a musical, as it's only now that Willmott returns to direct a full production at the same venue. Based on the true story of a notorious 19th century hoax that took in polite society, Sir Charles Worrell (Phil Sealey) narrates the story of how he and Lady Elizabeth (Sarah Lawn) were approached by Spanish con-man Osvaldo Agathias (Joseph O’Malley,) who claimed to have found a shipwrecked princess from an unknown land. Princess Caraboo (Nikita Johal) speaks no English, and the motherly Lady Elizabeth takes a liking to her, so instead of running off with the silverware as planned, Caraboo sticks around, and meets their nephew Eddie (Christian James,) who they hope might be able to communicate with her.

By the time Eddie realises she's a fraud, Caraboo's already become a sensation in the South West and beyond. He's also, of course, started to fall in love with her - but Lord Marlborough (Oliver Stanley) also has plans for her and isn't used to being told no. 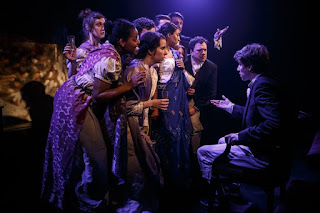 The songs have a bit of an Alan Menken / Disney feel to them, which in a studio space inevitably invites comparisons to The Clockmaker's Daughter - a bit of an unfair comparison as that's hard for anything to live up to for me, but Princess Caraboo makes a good stab at it. It doesn't lack for charm, and the framing device (that sees the Worrells and their servants recreate the events they got caught up in) gives the actors a bit of leeway to ham things up - O’Malley's Agathias specifically refuses Worrell's request to tone things down and goes for a full pirate-with-eyepatch, while the silliest point is probably when Caraboo and a baffled linguist (Ruben Kuppens) sing a whole song at each other in gibberish ("Speaking Caraboo.") 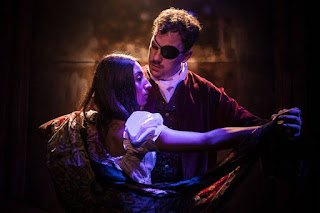 The songs take in a variety of styles to help keep things fresh - from a pastiche of Spanish music in Agathias' big number "When," to a waltz in the big group dance "Fabulous" - with a lot of catchy tunes, none more so than Caraboo's signature song "I Am My Own Person," a proper earworm that'll be stuck in your head for some time afterwards. There's a generally excellent cast, with Johal and especially James in strong voice as the romantic leads. 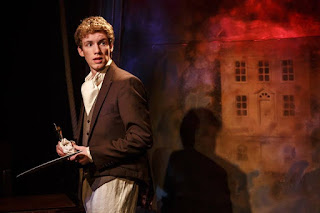 Things take a bit of a darker turn in the second act, which is also a bit flabbier than the first - "Daughters," a duet between Johal and the excellent Lawn, their characters bonding over both having lost children, is a moving moment and a good song, but its placement near the end means it feels like it's just holding up the dénouement; and when that dénouement comes, it succumbs to multiple ending syndrome, as Willmott can't quite decide when to leave things be. But despite a couple of quibbles this remains a real fringe joy - songs I'd happily listen to again, and a show that deserves, like Willmott and Collins' previous musical at the Finborough, Lost Boy, to have a further life after this run.

Princess Caraboo by Phil Willmott and Mark Collins is booking until the 22nd of April at the Finborough Theatre.