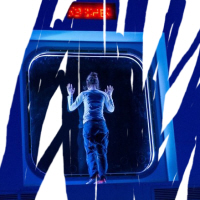 A much-anticipated new play from Alistair McDowall, after his sleeper hit Pomona, and following the dark fantasy of that play he goes sci-fi for X, set on a research station on retired planet Pluto. Not that there's much there to research (the Americans get all the interesting missions) and even if there were Ray (Darrell D'Silva) and his team's contracts expired weeks ago - or possibly months, but the clock which keeps the base on Earth time is increasingly unreliable - it might have been much longer than they think. Ray second-in-command Gilda (Jessica Raine) is visibly feeling the strain, prone to regular panic attacks and tears, and snapping at her co-workers Cole (Rudi Dharmalingam) and Clark (James Harkness.) Surprisingly chipper is Mattie (Ria Zmitrowicz,) who rattles around in the ceiling taking care of the life support systems which she refers to as "the girls."

But Ray is soon talking about a different girl, unraveling as he insists he's seen a child with an X-shaped scar for a mouth outside the window, and terrified about what'll happen when she gets into the base. 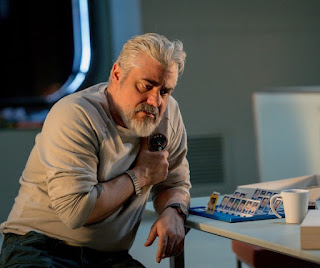 There's a lot going on in X, which plays out at first like a darkly comic office sitcom about people stuck with their annoying co-workers 24/7, as well as conjuring up a backstory of a scorched earth where only the oldest crew member, Ray, even remembers birds and trees, and the days when the last of each died. The story's told out of sequence, so we find out very early on that some kind of bloody death awaits Ray, who dies smearing an "X" on the window in his own blood, but as Cole reveals that the base's clocks are resetting when nobody's looking, the first of many question marks comes up over whether this is a theatrical device or the characters are caught in some kind of loop. 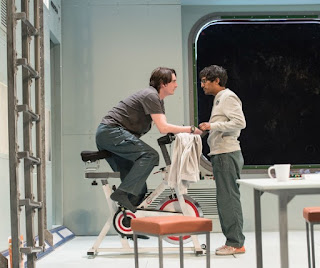 This is also when McDowall's play starts to become more of a base-under-siege horror story, Vicky Featherstone's production effectively marshaling the creepiness except for a moment when she breaks a cardinal rule of horror* at the end of the first act. Between the witty take on banal dialogue, the horror and the intense performances, this first act of X in particular is especially effective, and Merle Hensel's disorienting set design seems to play tricks with the eyes∞ that match the mindfuck of the writing. 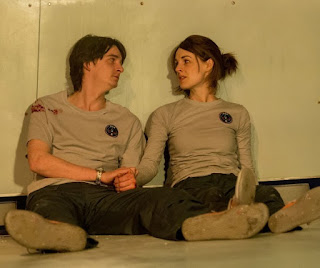 Things get odder after the interval, and in what is an increasingly popular theatrical theme we become less and less certain of how much of what we're seeing is real and how much in Gilda's mind, and even which if any of the other characters ever even existed. Although I didn't lose interest here, McDowall does allow the play to get a bit too tangled - a shorter and sharper look inside Gilda's fracturing sanity would probably have put the cap on the impressive first half more effectively. But for all that X's experimentation with form and narrative doesn't always work, when it does it's excellent.

X by Alistair McDowall is booking until the 7th of May at the Royal Court's Jerwood Theatre Downstairs.

*SPOILER ALERT: Lee Curran's lighting comes up after the sinister arrival of the girl (Grace Doherty or Amber Fernée,) revealing the mysterious monster as a child actor with a prosthetic on her mouth

∞despite my brain knowing which part of the set was flat and which was at an angle, my eyes insisted otherwise
Posted by nick730 at 22:53