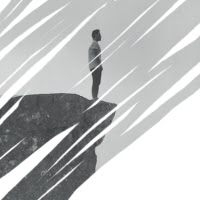 I don't know if young playwrights are all being specifically inspired by Florian Zeller at the moment, or whether the French writer was just the advance guard for a generation that likes to put audiences in the middle of minds in collapse, and letting them try to put the pieces back together. In Brad Birch's The Brink it's the late-twenties crisis of History teacher Nick (Ciarán Owens,) trying to be a positive adult influence on his pupils while not entirely feeling like an adult yet himself. He's been with his girlfriend Chloe (Shvorne Marks) since university, but while she's increasingly career-driven he doesn't seem to know what he wants. For several nights in a row, he's woken by the same nightmare: Going into work with the intention of resigning, he arrives to find the whole school blown up. He soon has reason to believe this isn't just in his big head, but a premonition.

When he confides in the head teacher, Mr Boyd (Vince Leigh) believes that Nick has somehow been let in on the school's dark secret: The playing fields are built over an unexploded WWII bomb. 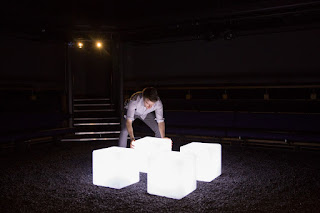 Owens has a wild-eyed frantic energy that helps carry the black comedy of the early scenes as Nick becomes increasingly paranoid - not helped by his colleague Jo's (Alice Haig) conspiracy theories as to why Boyd might want to encourage his delusion. The three other actors in Mel Hillyard's production each double a couple of other roles, but with only minimal changes to their costume - a great deal is made of the fact that Marks only pulls her socks up to transform into Jessica, a student Nick becomes convinced is the only one who understands him. 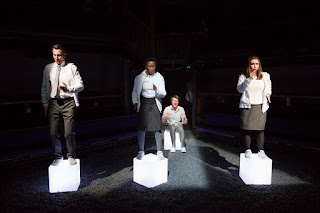 There's a couple of hints that some of this doubling has further significance, and that Nick may be conflating some people and imagining others. Hyemi Shin's design is, in an understated way, one of the hits of the production - the Orange Tree seems to have a good track record of giving each show its own identity despite the permanent in-the-round setup, and here the floor is covered in ash made of recycled rubber, giving a permanent ominous callback to the destruction in the dream. 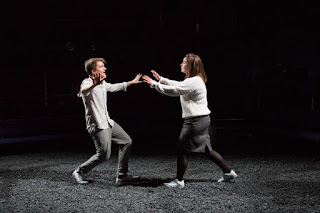 The play starts strongly and as well as its jittery lead there's good performances everywhere, including a couple of slimeball characters from Leigh. Hillyard's production gets less confident though as the story gets more confused, and despite an unnerving climax it becomes harder to see what Birch is trying to say. Certainly entertaining, but The Brink gets itself knotted up in its own ambiguity, and ultimately doesn't give us enough reason to try and untangle it.

The Brink by Brad Birch is booking until the 30th of April at the Orange Tree Theatre.