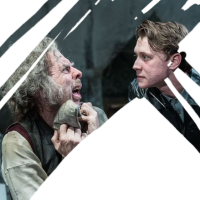 The Matthew Warchus era might have kicked off with a promise to take the "old" out of the Old Vic, but so far this year at least it's felt as if there's still plenty of cobwebs in the building, with a couple of ponderous productions of classics. For the second show in a row there's a deeply old-fashioned two intervals, which feels particularly perverse when it's Pinter - a writer with whom even one interval usually feels like an extravagance. At least they're only 15-minute breaks this time, but it still pushes The Caretaker up to the three-hour mark. Warchus himself directs Timothy Spall as Davies, a homeless racist given a bed for the night by the slow-witted Aston (Daniel Mays.) But despite his effusive thanks and protestations that he'll be leaving very soon, Davies quickly makes himself comfortable and shows no sign of actually leaving the flat.

Rob Howell's set is a rain-soaked roof that slides back ominously to reveal the dangerously cluttered, crumbling attic of what is apparently a much larger house whose garden and other rooms are just waiting for Aston to do some refurbishment work on them. 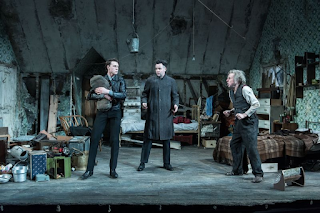 But Aston's insistence that he's going to build a shed is much like Davies' plans to go to various parts of London where he claims he's been promised a job, or a new pair of shoes, in a play where all the characters keep accusing each other of laziness while not appearing to actually do anything themselves. And how little they do is especially apparent as Warchus seems to have taken the cliché about Pinter being all about the pauses to heart, and come up with a leisurely production that has a lot of trouble building up steam and - crucially - atmosphere. 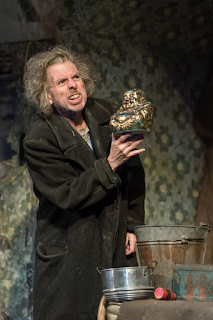 There's a lot of dark humour here but, playing up to what is admittedly a powerhouse performance by Spall after a couple of decades away from the stage, the production has focused entirely on the humour at the expense of the darkness. It did seem to result in a lot of laughs for many in the audience but neither Christopher nor I were convinced - given this is a story where a man casually invites a stranger into his home and lets him take over, there's a weird lack of any sense of mystery, threat or oddness, and without them this felt, to me, just a slow trek through absurd dialogue. 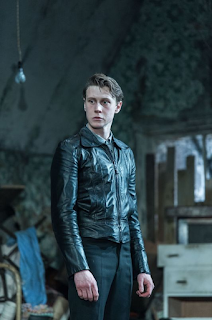 The energy does pick up whenever George MacKay appears as Aston's aggressive brother Mick, who owns the house - it's a motormouthed performance that gets a lot of its humour from the sheer contrast with the sleepy pace around it. But Mick's appearances are brief, and between them things dip again, especially when Mays - in a scene I have seen be very effectively moving before - gives an interminable account of his character's time in a mental hospital. In the blackouts between scenes - during which stagehands invariably seemed to shuffle around to no effect that either of us could spot - Gary Yershon's vaguely creepy music plays, only highlighting the lack of atmosphere when the lights go up. The Caretaker is clearly a tricky play and Warchus' lighter but leisurely approach seems to have found some fans, but for me it left the whole thing rather empty and unengaging.

The Caretaker by Harold Pinter is booking until the 14th of May at the Old Vic.