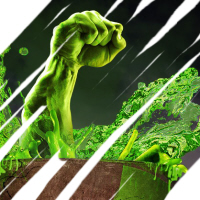 In what's definitely becoming something of a Southwark Playhouse specialty, it's another kitsch American musical based on an unlikely source - this time the cult 1980s Troma horror movie by Lloyd Kaufman (who was in tonight's audience and got a shout-out from the cast,) The Toxic Avenger. Tromaville, New Jersey is the world's toxic waste capital, thanks to the corrupt Mayor (Lizzii Hills) who secretly owns the company dumping mysterious green sludge everywhere. When nerdy environmental activist Melvin Ferd the Third (Mark Anderson) finds out what she's been up to, the Mayor has her goons drown him in a vat of toxic waste. But instead of killing him it transforms him into a deformed, smelly but super-strong monster, and as The Toxic Avenger - or Toxie to his girlfriend, the blind librarian Sarah (Hannah Grover) - he goes on a violent rampage to clean up Tromaville.

Writer Joe DiPietro and composer David Bryan are the team behind Memphis, and this certainly shows a different style to their writing, although still a tuneful one. 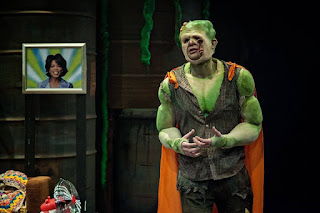 We're in all-out campy comedy territory as Toxie pursues the sexually aggressive Sarah, who was turned off by him as Melvin but is excited by his new muscles and the fact that he's exotic (he's got a strange name and smells, so she assumes he's French.) Although in many ways a sweet show despite the carnage, The Toxic Avenger is quite overtly kinky, especially from the randy Sarah, who does more crotch-rubbing than you'll see in any musical outside of The Book of Mormon's maggot-ridden scrotum, and the conversation about what constitutes a lot of lovers was probably my favourite gag of the evening*. 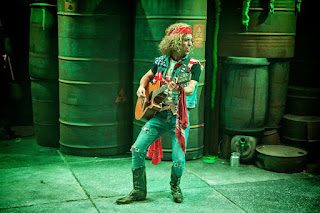 The show has the kind of high production values common to Southwark's big musicals, with a five-strong band and a multi-level set from Mike Lees; but that doesn't extend to the cast, whose frantic doubling is a running joke: The whole cast numbers five, with Marc Pickering and Ashley Samuels playing dozens of roles, male and female, often with only seconds between scenes. In fact one of the most un-PC running jokes, in which the blind Sarah gets stuck on stage without her white stick and takes ages to find her way offstage, is eventually confessed to be a way of giving the others a chance to do their quick-changes. Anderson and Grover are strong-voiced and a sweet central couple, Pickering and Samuels provide the big laughs, but Hills is the show's stand-out turn as both the Mayor and her nemesis, Melvin's mother, and the Act I finale sees her duetting with herself as her two characters come to blows. 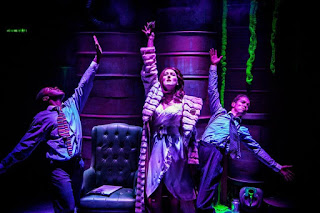 There's a certain expectation going into a musical with a title like The Toxic Avenger, of a funny and irreverent couple of hours, and neither the show itself nor Benji Sperring's production disappoint. The frantic comedy does flag a bit occasionally, but DiPietro and Bryan mix things up a bit with increasingly meta references to other schlocky musicals - Brad and Janet making an ill-advised detour through New Jersey, and an Audrey II plant on Sarah's side table. Not every moment works, but you can't fault the energy and enthusiasm that's gone into making this a very silly, entertaining evening.

The Toxic Avenger by Joe DiPietro and David Bryan, based on the film by Lloyd Kaufman, is booking until the 21st of May at Southwark Playhouse's Large Theatre.