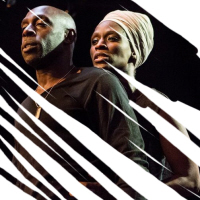 Two more points of view on the story of Euripides' Iphigenia at Aulis at the Gate as part of The Iphigenia Quartet; you can read my review of Iphigenia and Chorus here, but tonight Caroline Bird gets arguably the toughest job, of trying to see things from the perspective of Agamemnon. Although it's his brother whose wife has been abducted, Agamemnon (Andrew French) is leading the Greek charge to get her back, and is therefore the man in the spotlight. Bird focuses on him not as a bloodthirsty villain but as a rather weak man buffeted by circumstance and unable or unwilling to stand up to it. As the play begins he's consented to the sacrifice of his daughter but changed his mind, sending a letter to his wife telling her to stay away. It's too late, of course, and besides the Messenger (Louise McMenemy) is brutally pragmatic about the Greek cause and makes sure the letter doesn't reach Clytemnestra.

Instead she gives it to the man who emerges as the real villain of the piece, Agamemnon's sociopathically distant and callous older brother Menelaus (Nigel Barrett.) 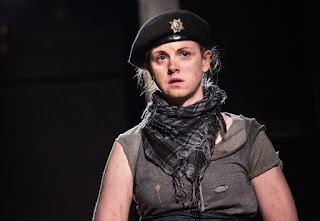 Cécile Trémolières' set for The Iphigenia Quartet is a large sacrificial slab in the centre of the traverse; while none of the four plays actually shows the death, the grate at its centre, waiting to collect sacrificial blood, is an ominous centrepiece. But there's also a recurring motif of stags' heads, reminiscent of both the sacred stag Agamemnon killed to incur Artemis' wrath in the first place, and the deer that (possibly, depending on who you believe,) replaced Iphigenia as sacrifice at the last minute. Director Christopher Haydon expands on this idea, with the brothers not only having the design tattooed on their necks, but almost literally locking horns when they fight over Iphigenia's fate. 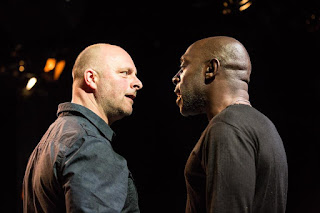 Like the other double bill, this one starts with the - comparatively - traditional narrative, and it's a strong retelling although I'm not sure describing the way Agamemnon won Clytemnestra in marriage - by murdering her first husband and son - fits with the man as we see him. In any case, the show is stolen by Sharon Duncan-Brewster's Clytemnestra - a force of nature whether it's in glee when she still believes the story about her daughter's royal wedding, or in fury when she discovers the truth. 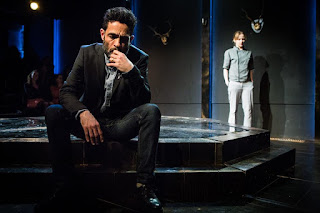 The queen is the focus of the final piece but neither she nor any of the other major players actually appears: Lula Raczka writes and Jennifer Tang directs Clytemnestra, told at one remove both within the story and outside it: A movie Director (Anthony Barclay) pitches a film adaptation, the first of what he hopes will be a franchise following Clytemnestra's turn to murder; while a Professor (Susie Trayling) lectures on Euripides' play. Both come back not to any of her speeches but to the moment when she remains silently on stage, by a door on the other side of which her daughter is being sacrificed. Dwane Walcott is a Soldier who was with her at the time, and perhaps unwisely tried to help her. And then Shannon Tarbet's Maid works at the palace during the war and its aftermath; to her there's something obscene about the story of Iphigenia being replaced with an animal sacrifice, the child of royalty being spared by the gods who showed no such mercy to soldiers like the Maid's brother. 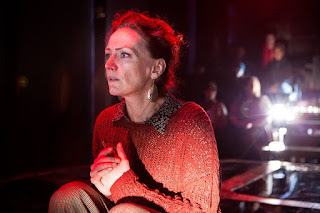 It's essentially a deconstruction of Iphigenia at Aulis, the most open-ended of the four plays, not entirely satisfying as a result but fascinating in the questions it asks nonetheless. On balance I would pick Iphigenia /Chorus as the stronger of the two double bills, but the whole project is one I've found very interesting, with four writers taking the same story - including quite a lot of specific details which occur throughout - and being led to very different places by it. It's interesting how they sometimes end up in the same places as well though: The aforementioned "happy ending," where Artemis saves Iphigenia at the last minute, is seen by more than one writer as a betrayal of the regular soldiers, of Greek families having to send their sons and daughters to die while their leaders are let off making a similar sacrifice. 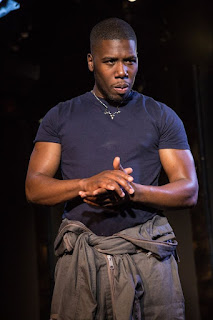 The Gate also continues to be one of the few places reliably delivering succinct theatre - even with two plays per night they've resisted adding an interval, meaning that while flabby running times are a theme everywhere else this year, they continue to buck the trend and deliver a wealth of ideas without an indulgent running time.

The Iphigenia Quartet - Agamemnon by Caroline Bird and Clytemnestra by Lula Raczka, based on Iphigenia at Aulis by Euripides, is booking in repertory until the 21st of May at the Gate Theatre.