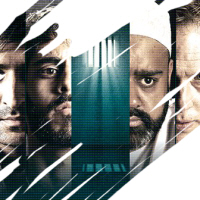 I think this is the last time a trip to the Tricycle will feature the theatre's trademark red scaffolding holding up the auditorium, as it's the next venue about to get a major facelift. The seating's all going to be replaced, which may be why designer Lizzie Clachan was at liberty to get started on that a little early, reconfiguring the stalls slightly to turn the stage into a corner thrust - a prison cell that juts out into the audience, but slides gradually backwards as the play goes on and the situation gets bleaker. The Invisible Hand is set in some remote corner of Pakistan, where an obscure terrorist group opposed to the Taliban have kidnapped American banker Nick Bright (Daniel Lapaine.) He's actually a fairly minor figure in the bank, as they were really trying to abduct his boss, so the hoped-for $10 million ransom is slow in coming.

But a chance remark gives his jailer Bashir (Parth Thakerar) an idea: Nick can use his share-trading skills to short the markets, training Bashir up to help him raise the $10 million himself. 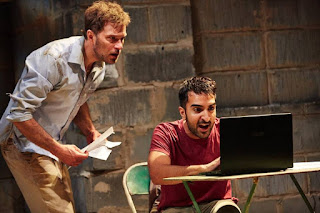 So a play that looks as if it's going to be a hostage drama about America's treatment of the Middle East does, of course, retain that element but also turns into a financial thriller. The ever-changing relationship is an interesting focal point; originally from Hounslow, Bashir believes his father's generation betrayed Pakistan by emigrating and leaving the country to its fate, and has returned, as he sees it, to help fight corruption. But even as Nick becomes friendlier with his initially aggressive captor, he finds telling him how the market works will result in his finding violent ways to influence it. 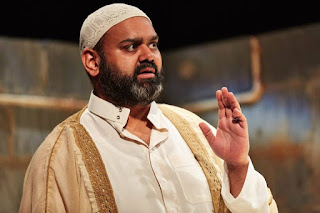 As well as finding an interesting way to discuss both global economics and politics in Pakistan, The Invisible Hand also sees corruption on a more intimate scale as the Imam (Tony Jaywardena) Bashir has given his life up to follow turns out to have been skimming money from the investment fund, keeping Nick ever further from his goal - and not using the cash for hospitals like he claims. The betrayal helps build to a dangerous climax. 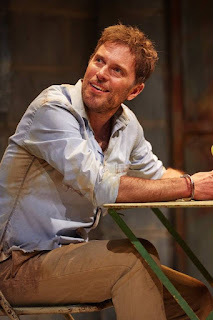 It was Ayad Akhtar’s Disgraced that won him the Pulitzer, but I was actually fairly underwhelmed by that one. The Invisible Hand is much stronger, a politically charged piece but also completely effective as a thriller - whether it's the close calls on the stock exchange or the much more tangible danger to everyone's lives. It gets a typically taut production from Indhu Rubasingham, and an intense central relationship from Lapaine and Thakerar.

The Invisible Hand by Ayad Akhtar is booking until the 2nd of July at the Tricycle Theatre.