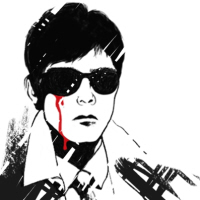 The Old Red Lion unearths an obscure slice of 1960s kitchen sink drama in Heathcote Williams’ The Local Stigmatic, given a 50th anniversary production by Michael Toumey. It's an Angry Young Man play, or in the case of Wilson James' Graham a STUCK ON CAPSLOCK YOUNG MAN, given a bad tip about a greyhound race at the start of the play, and screaming in his flatmate's face about it for the rest of the hour. Ray (William Frazer) is seemingly more level-headed and placid, but something between fear and a crush keeps him in thrall to his friend, and he reveals a gift for actually carrying out violence rather than just threatening it. When Graham wants to beat up a blind man in the street Ray stops him, but he's more supportive of his next choice of victim: They spot moderately famous actor David (Tom Sawyer) in a pub, and flatter him with their knowledge of his work.

They have dark ends in mind, especially because David is one of the celebrities Graham "follows" - whether metaphorically or literally stalking is never entirely clear. 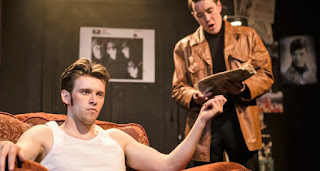 In many ways I can see both how The Local Stigmatic would have been an influential hit in 1966 and have some relevance today - a frustrated and angry underclass looking with envy and hatred at the rich and famous, with a particularly modern kind of celebrity fixation. But the 60-minute play feels rushed, and I feel as if I've seen other plays of the time with a more cohesive and coherent vision. 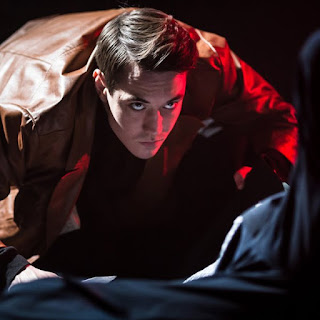 There's probably a power to the play that I'm missing because Toumey's production is oddly timid - there's no attempt to acknowledge the undeniable homoeroticism in the dialogue, and the violence is understated to the point of almost, but not quite, coming across as stylised. We don't really get to know who David is other than a celebrity, and Graham's dialogue being largely him shouting the name of the losing greyhound for an hour means it soon becomes white noise. So the beautiful, dangerous and enigmatic Ray ends up the only character we want to understand better. I was left unsure about why I didn't like The Local Stigmatic - a piece of shock theatre whose power to actually shock went decades ago, or some nuance the production didn't delve into? Probably a little of both.

The Local Stigmatic by Heathcote Williams is booking until the 28th of May at the Old Red Lion Theatre.