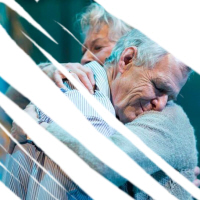 Playwright Stef Smith takes the metaphorical language of dangerous animals and swarms of insects that accompany right-wing scaremongering about immigration, and imagines it as something literal in her apocalyptic Human Animals, but somewhere along the way the dark absurdity turns tiresome: Nancy (Stella Gonet) is waiting for her daughter Alex (Natalie Dew) to come back from a gap year, but her return coincides with a mysterious, localised plague among animals and birds that sees hundreds of pigeons at a time fly into windows, and dead foxes piling up in every garden. Nancy's friend John (Ian Gelder) is befriended by an odd man in the pub - Si (Sargon Yelda) turns out to be in charge of the efforts to deal with the crisis, which largely consist of quarantining the whole neighbourhood and incinerating first the diseased animals, then whole buildings, just in case.

Lisa (Lisa McGrillis) works for Si, but she's hiding the fact that her boyfriend Jamie (Ashley Zhangazha) is sympathetic to the animals, and keeping an injured pigeon in a shoebox to try and mend its wings. 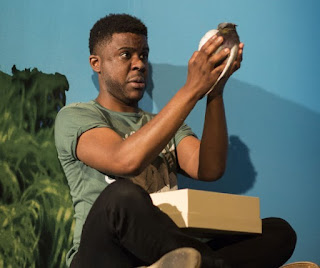 Camilla Clarke's primary-coloured set design looks a bit like a 1960s' sci-fi vision of the future, or the inside of an aquarium habitat (where, in fact, some of the action ends up taking place.) The back wall is a large perspex window on which birdshit and blood is occasionally splattered, and the play opens with a blood bag splashing onto the stage to represent one of the bird strikes. For the first half-hour I was unsure what I really thought of the play's surreal nature but - unusually, as this sort of realisation tends to build gradually - it became suddenly clear about halfway through that this really wasn't for me. 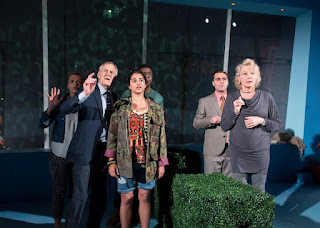 Smith's prose tends towards the florid, and every so often the characters break off to stare into the middle distance and speak disconnected words in a repeated cycle - honestly why the Royal Court wants to keep making audiences think they're back In the Republic of Happiness is a mystery to me. Although there are deliberately funny lines, there's also quite a few too many unintentionally funny ones, and the sombreness of Hamish Pirie's production doesn't help the urge to get fits of the giggles when the characters come out with something like "Does it hurt when they eat you?"* or tell us about a suicidal dolphin. With its subtly growing menace and ideas like the fact that any adverse effect of the animals on humans is purely anecdotal, Human Animals looks promising as a darkly surreal fable, but it quickly loses its way.

Human Animals by Stef Smith is booking until the 18th of June at the Royal Court's Jerwood Theatre Upstairs.

*of course context is everything, so the context is: Lisa is considering being eaten alive by foxes as a lifestyle choice, as Jamie is already doing‡

‡also, in the context of this being a metaphor for immigration, what exactly is Smith trying to say if the people who let the animals live end up getting eaten by them?
Posted by nick730 at 22:23