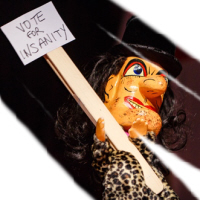 You do tend to get a little something extra when you're in the audience for a James Graham play; The Man had its receipts, Privacy came with airline safety-style instruction cards, while his latest, Monster Raving Loony, comes with a whole goody bag on every seat, containing party hat, bingo card, raffle ticket and a gift - mine had a party blower but I spotted comedy mustaches and plastic Groucho Marx glasses elsewhere*. This being Graham, the sort of party this is is a political party, but not the kind with actual hopes of winning an election - in fact one rule of the Monster Raving Loony Party was that anyone who actually won their seat would be expelled from the party. This is the story of Screaming Lord Sutch, born in 1940 as David Sutch (Samuel James) in Harrow, North London, growing up in a cluttered house with his widowed mother while the nearby public school churned out future ministers.

The Profumo Affair in 1963 resulted in a by-election that saw Sutch stand, semi-seriously on a platform aiming to represent disenfranchised teenagers, as a candidate for Profumo's Stratford-upon-Avon seat; he took the inevitable crushing defeat badly. 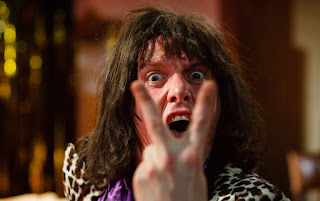 But he soon decided there was a side of politics that he belonged in and it wasn't the winning side: First as an independent, then with his own party of similarly-minded Loonies, he became the face of the ridiculousness of politics, his own specialty being to run against the current Prime Minister. This anarchic spirit is what defines the play, but what Graham is doing is actually very audacious: The entire story is told in pastiches of the popular comedy of the times it takes place. 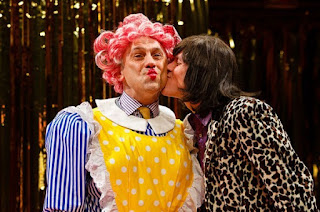 So we start with music hall before a panto where the Dame (Joe Alessi) is David's mother, then moving on to recognisable sketches, everything from That Was The Week That Was, Morecambe and Wise, Fawlty Towers, Yes, Minister to Absolutely Fabulous getting a look-in. James is a gifted mimic who slides between iconic comedy characters for two hours (his Alan Partridge is the only one that doesn't really work, out of dozens that do.) 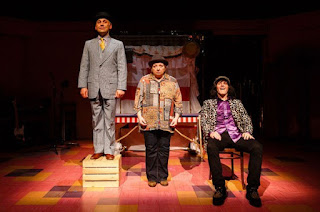 The rest of the cast are no slouches either, whether it's Jack Brown's Baldrick, Joanna Brookes' Peter Cook, Vivienne Acheampong's Babs Windsor or Alessi's stroppy Michael Parkinson interviewing Sutch (who at the time is Frank Spencer.) Meanwhile Tom Attwood composes as well as leading the musical accompaniment in the story of a man who - of course - also saw himself as something of a rock star. The various styles of comedy are all well-balanced in Simon Stokes' production, including a very slick bedroom farce early in the play (one of many scenes where Bob Bailey's set and costume design economically get us in and out of complex setups.) 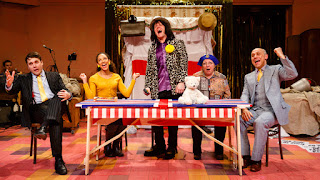 One of the many impressive elements of Monster Raving Loony is that it succeeds in telling its biographical story entirely through ever-changing comic pastiche: Clearly this isn't going to be a detailed and academic biography but I feel like I know a lot more about Sutch's life and his place in British politics - the play posits him as the Roman fool whose job was to remind the Emperor that his glory was temporary. It was a role Margaret Thatcher in particular seems to have had no time for, and the play reveals the lengths she went to to keep Sutch and his party from standing behind her on election night - from hugely increasing the deposit needed to stand, to constantly changing the necessary rules and forms. Although the comic styles roughly correspond to the time we've got to in the story, they also always seem to be perfectly suited to the theme of each scene. So when Sutch needs to magic up some party funds he becomes Tommy Cooper, his struggles with depression become a dark Python sketch, and the fact that he and his mother were obsessive hoarders is Steptoe and Son - a failed attempt to offload some of the tat on the audience is where the raffle ticket comes in, while the bingo takes place during a 'Til Death Us Do Part scene. His run-ins with Thatcher are a Punch and Judy show, while her obstructive officials are the Germans from 'Allo 'Allo or a sneering Boycie from Only Fools and Horses. 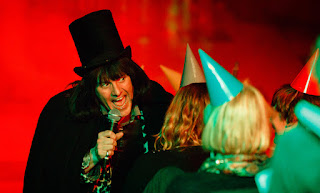 Although the very specific references mean Monster Raving Loony is a particularly British show‡, within that it has a remarkably broad appeal, working both as comedy, biography and nostalgia, its politics never as overt as in some of Graham's past shows but inevitably always there - it doesn't take much for supposedly dated attitudes and events to strike a chord with the world in 2016. At a push, I could criticize the fact that Sutch's mental illness is dealt with a bit offhandedly, but this isn't really a show I can pick many holes in - entertaining on one level even as on another I was sitting back and admiring the skill required to put it all together, a second trip to Monster Raving Loony will probably be in order, and there's a wide variety of people I'd recommend it to.

Monster Raving Loony by James Graham is booking until the 18th of June at Soho Theatre.

*some people also got a cup of tea, although not in the party bag; they're not that loony.

‡of course the Morecambe and Wise tribute The Play What I Wrote became a Broadway hit despite their never having been famous in the US so who really knows what travels and what doesn't?
Posted by nick730 at 22:11