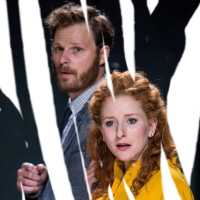 Bernard Shaw's The Philanderer is set in and around a gentlemen's club with a difference: One that allows in both ladies and gentlemen, on the proviso that the women be approved as "un-womanly" and the men as "un-manly." It's Shaw's response to the scandalously independent women of Ibsen - the club is called The Ibsen Club - and sees its titular character use women's new wish for independence and equality to carry out his affairs without being expected to commit. Charteris (Rupert Young) is sort-of considering settling down with the widow Grace Tranfield (Helen Bradbury,) but first he needs to get rid of his other lover, Julia (Dorothea Myer-Bennett.) He tries to dump her, reminding her that she bought into a relationship where she could break it off at any time so the same applies to him. When that doesn't work, he tries to marry her off to another of her suitors instead.

Charteris has unlikely, though largely unwitting, allies in both women's fathers - Grace's father Cuthbertson (Mark Tandy) is a drama critic unimpressed by any form of naturalism on stage, while Julia's father Colonel Craven (Michael Lumsden) seems surprisingly healthy for someone who apparently only has a few months to live. 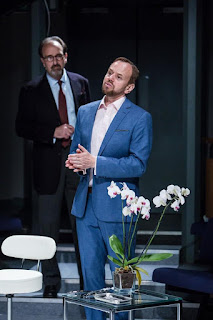 This is down to a mysterious liver disease diagnosed by Dr Paramore (Christopher Staines,) who just so happens to be the only person who thinks it actually exists. He's also the man Charteris is trying to marry Julia off to. The Philanderer is ultimately Shaw satirising a new breed of modern women, but with gender inequality still a major topic over a century later, Paul Miller's production acknowledges that things have only moved on so far by making it modern-dress. 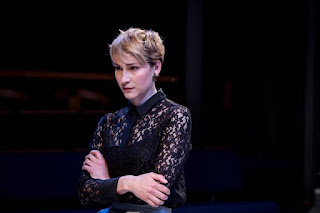 It's an updating that's partly successful, but would probably have been more so if it had been bolder; the characters may be in jeans but the performances wouldn't be particularly out of place in a period production - I was wishing for some loud music to shake things up, the characters to check their mobiles when their companions bored them*. Still, there are some witty touches in the production that match the repartee of the script - Paramore treating a marriage proposal like a medical consultation, scuttling around his surgery on his wheely stool making tea, is a fun touch. 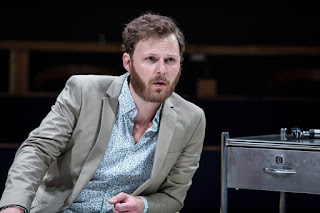 And even if the performances don't quite match the aesthetic, they're enjoyable ones - Young charmingly reprehensible, Bradbury frostily detached and Myer-Bennett buffeted by her character's confused, ever-changing emotional loyalties. Paksie Vernon as Julia's sister Sylvia provides a no-nonsense counterpoint, the one woman who not only talks the talk but can walk the walk of being modern, talking back to her father and immune to the philanderer's charms. But the play's structure also shows its age: Simon Daw's design gives each of the three acts a distinctive centrepiece suspended from the ceiling, so it's this year's two-interval theme again to allow set changes. It stops the show from building up enough of a head of steam, and while Miller's production blows some of the dust off The Philanderer, it doesn't get rid of all of it. 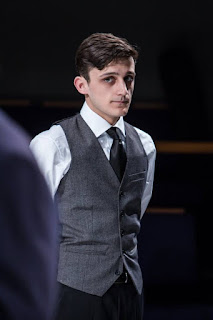 Joe Idris-Roberts only has a couple of lines but he's nice to look at so let's do that now.

The Philanderer by Bernard Shaw is booking until the 25th of June at the Orange Tree Theatre.

*I think there's probably a time distance after which anachronisms don't matter. Last night's Blue/Orange is 16 years old, recent enough that the characters smoking indoors is jarring. But Shaw's early work is now old enough and the language stylised enough that, like Shakespeare, you can transpose it to a new setting and just accept that not every reference - like this play's divorce laws - will make literal sense.
Posted by nick730 at 18:32