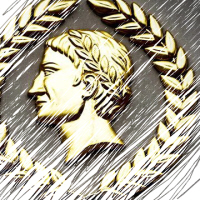 As well as TV spectaculars, radio has also been getting in on the BBC's Shakespeare Festival, and after listening to their version of Hamlet a couple of years ago, I gave Radio 4's three-part Julius Caesar a go - with a bit more trepidation this time, as regular readers will both know it's far from my favourite Shakespeare play. But director Marc Beeby had once again assembled a quality cast, and audio-only Shakespeare can throw up some interesting details you don't always notice with everything else going on on stage. The three 45-minute episodes ended up dividing the story up quite neatly - episode one boiled down to the building of the conspiracy, with Cassius (Sam Troughton, who's previously played Brutus on stage,) convincing Brutus (Robert Glenister) that the newly-promoted Julius Caesar (Tim Pigott-Smith) has the potential to be every bit as much of a brutal tyrant as Pompey, the man he's just overthrown; and that assassination is the only way to protect Rome from this.

It's not always a part of the play that works for me but a cast that also includes Fenella Woolgar as Portia help build up the tension amid the various prophecies and harbingers of doom the play piles on. Best is the middle episode, which includes the assassination itself: Written in the same year as Hamlet, I hadn't noticed before that it includes a sort of companion speech to that play's "fall of a sparrow," in which Caesar proclaims that death will come for everyone sooner or later, although here it's more of a dismissive statement than in Hamlet's case, Caesar not really believing that his time has come. One question for any production is how much Caesar actually does pose the risk the conspirators claim, rather than just standing in the way of their ambition; Pigott-Smith certainly finds a keenness to use his power of veto from his very first appearance leading the Senate.

Another highlight of the second episode is Jamie Parker's delivery of Mark Antony's "Friends, Romans, Countrymen" speech, his enjoyment of just how manipulative it is apparent just from his voice. Unfortunately this leaves the final episode the weakest as all-out war erupts; these scenes rarely work for me even on stage but on radio with just a lot of clanging sword sound effects and arguments as the conspirators implode, and even on the winning side the seeds of problems between Antony and his ally Octavius (Wilf Scolding) are already planted. In parts this ended up more interesting to listen to than I had expected - being able to dip in and out of it in manageable chunks helped - but ultimately the issues I have with the play reasserted themselves and, as usually seems to happen, left the violent climax as a bit of a damp squib.