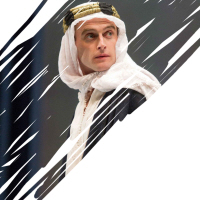 Howard Brenton’s latest trip into history looks at the man best known as Lawrence of Arabia - although as the title Lawrence After Arabia suggests, it doesn't look at T.E. Lawrence's most famous deeds except in flashback. In fact most of the action takes place in the home of George Bernard Shaw, where Lawrence (Jack Laskey) liked to hide away from the press, despite the fact that his friend's own fame meant reporters were rarely far away. Jeff Rawle plays Shaw, or possibly Captain Birdseye, and Geraldine James his wife Charlotte, who takes on the job of editing Lawrence's autobiography Seven Pillars of Wisdom, and discovers more in it than she'd expected. John Dove, who's directed Brenton's work at the Globe before, now moves to the playwright's other regular haunt on Hampstead's main stage, and a story that opens with Lawrence a national hero after his victories in the Middle East during World War I.

It's a fame and acclaim he's not entirely comfortable with, and he's dealing with it in eccentric fashion by starting his military career from scratch, joining the RAF under a pseudonym. 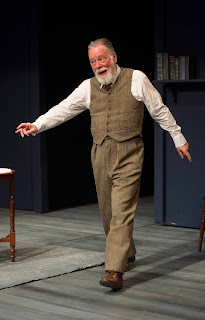 But with Field Marshall Allenby (William Chubb) on his case, and the American journalist Lowell Thomas (Sam Alexander,) who documented his time in Arabia, trying to profit from a series of lectures, his latest adventure doesn't look likely to stay secret for long. With Lawrence now best known as the subject of the David Lean film, Dove's production also aims for something of a cinematic sweep despite the mostly domestic setting - Michael Taylor's set even opens up to widescreen for the flashbacks to the desert. With this comes a wistful tone, a kind of nostalgia for an early 20th century English eccentricity that mirrors the romanticised way Lawrence thinks of the desert - despite Prince Feisal's (Khalid Laith) warnings against this. 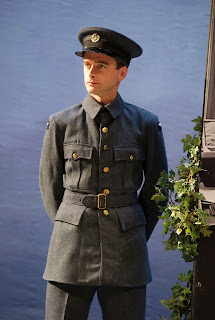 But while the production is thoughtful, by Brenton's standards the story feels half-baked, especially in the first act where he struggles to decide what the real focus of the story is, and it's hard to get a grip on the characters; those flashbacks to Lawrence's desert exploits feel a bit like a loss of confidence in the "After Arabia" conceit, and never quite work anyway. Things improve after the interval when the play becomes mainly about the relationship between Lawrence and Charlotte, who uncovers the ways he blames himself for the betrayal of the Middle East by Britain and France after the war ended. 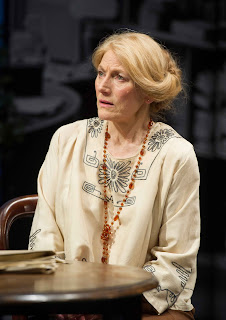 With the revelation of some invented sections in Lawrence's book, Laskey's geeky charm proves a good match for a character hiding a self-flagellating side beneath it, and there's some nicely observed scenes between him and James, their asexual brand of romance given a no-nonsense counterpoint by Rosalind March's po-faced secretary. But while it does uncover an interesting relationship and an unseen side of the legendary war hero, Lawrence After Arabia never really comes to life.

Lawrence After Arabia by Howard Brenton is booking until the 4th of June at Hampstead Theatre.