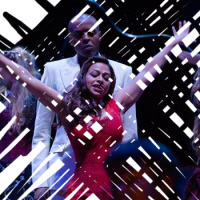 This year's official "Shakespeare play I'm going to end up seeing so often I'll be quoting it in my sleep" is clearly A Midsummer Night's Dream, which is packing in the productions over the next couple of months - I've got at least three planned between now and July, and I'm not even seeing all the versions London has to offer. First up is Erica Whyman's touring one for the RSC, subtitled A Play for the Nation for reasons that will become apparent. As a royal wedding approaches in ancient Athens, another potential marriage is in jeopardy: Hermia's (Mercy Ojelade) father won't approve of her marrying her beloved Lysander (Jack Holden) because he sees Demetrius (Chris Nayak) as a more suitable match. The two lovers escape to the forest, but Helena (Laura Riseborough,) in love with Demetrius, inexplicably thinks betraying them to him will help her own chances of getting him back.

The woods are also the home of king and queen of the fairies Oberon (Chu Omambala) and Titania (Ayesha Dharker,) and the four lovers get caught up in one of their marital spats. 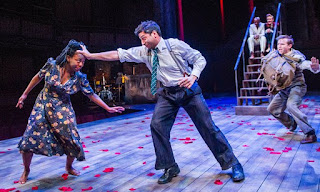 It may be A Midsummer Night's Dream but there's something decidedly autumnal about Whyman's production; Tom Piper's designs and Sam Kenyon's music give it a 1940s feel, the setting what looks like a bombed Mediterranean village, the arrival of the fairies signaled with scattered rose petals. It takes a while to build up steam, but then the play can be a bit like that at the best of times - it can feel like an hour's gone by and you're still being introduced to main characters. But with Lucy Ellinson on board things are bound to come to life, her Puck is a crowd-pleasing, sometimes crowd-surfing firecracker. 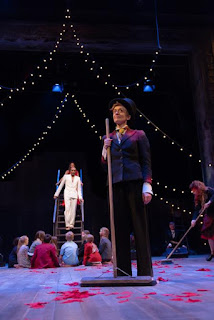 The "Play for the Nation" element comes from the sub-plot about a troupe of amateur actors, known as the Mechanicals, who stage a ridiculous play for the wedding entertainment. The production's high concept has been to use real amateurs for these roles, a different local company for each stop on the tour. Here in London it's Tower Theatre - Al Freeman as Snout, Tom Tillery as Starveling, Adam Moulder as Flute, Maria Waters as Quince, Peta Barker as Snug, John Chapman as Bottom and their sections of the play directed by David Taylor. The RSC have obviously hunted around for particularly strong groups of amateurs as the Mechanicals' scenes slot in very well with the rest of the show, and if it hadn't been advertised as such it wouldn't have been apparent that there was anything different about this particular part of the show (they even contribute to 2016's ongoing "playing the spoons" meme.) "Pyramus and Thisbe" reliably ends up being the show's highlight, the fact that the audience knows they really are amateurs lending huge waves of encouragement to the catastrophic play-within-a-play. 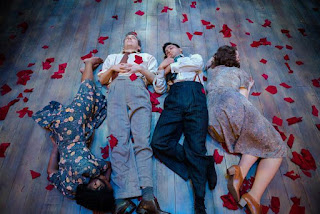 Of the main cast, unsurprisingly Ellinson's grinning Puck and Holden's geeky Lysander were my highlights, while Jon Trenchard gets a scene-stealing moment in the usually forgettable role of Philostrate. I didn't love it unreservedly - Riseborough and Omambala both have a tendency to over-emphasize their lines, and there are moments that feel drawn out. And while I've seen some understated interpretations of Bottom's ass' head in my time, Piper's design for the ears make it look as if the Mechanicals are horrified at the sight of Bottom wearing a balaclava. But if not perfect - or actually particularly summery - it's a very strong Dream: Not only did it keep Vanessa, who was still jet-lagged, awake, she really got into the spirit of the show. And although there were large school parties in the stalls as well as some very young children on our row, the only sound to come out of any of them was laughter - there's always huge satisfaction to be had coming out of what could well be someone's first-ever Shakespeare, knowing it was a good experience for them.

A Midsummer Night's Dream by William Shakespeare is booking until the 21st of May at the Barbican Theatre; then continuing on tour to Cardiff, Belfast and Stratford-upon-Avon.