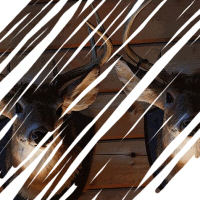 Greek tragedy continues to get reinvented, and after a Medea last year that told the story from a very different point of view than usual, the Gate now turns to the story of Iphigenia, and asks four different writers to each put their own spin on the myth behind Euripides' Iphigenia at Aulis, that also forms the background to the Oresteia: The Greek ships are waiting to sail out to Troy, but the war can't begin if the army never gets there, and the winds stubbornly refuse to blow. It turns out the goddess Artemis is pissed off with General Agamemnon for killing one of her sacred stags while hunting; she'll only let the winds blow if he sacrifices his daughter Iphigenia. What happens next varies depending on the version of the myth, but blood always ends up getting spilt, and Agamemnon gets his war.

Christopher Haydon has commissioned his four writers to each take a different angle on the story in a forty-minute play, and they're being presented in repertory as two double bills. 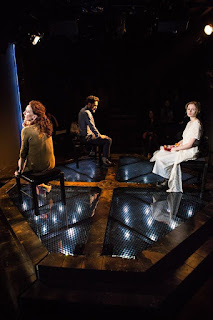 First up tonight, writer Suhayla El-Bushra and director Rebecca Hill tackle the perspective of Iphigenia herself, Shannon Tarbet playing her as a sulky teenager in a very domestic setup reminiscent of the family dinners in Robert Icke's Oresteia. Much of the focus of El-Bushra's version is on the subterfuge that brings Iphigenia to the altar, the lie of an arranged marriage to Achilles (Dwane Walcott.) Even before the truth comes out her mother Clytemnestra (Susie Trayling) feels she and her daughter have been betrayed in being used as a political pawn like this while Iphigenia is still only 15. 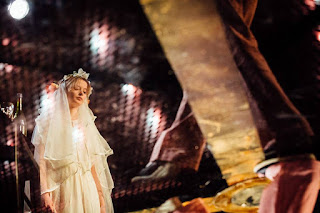 Despite its short running time El-Bushra's play is very dense with ideas, with much focus on Anthony Barclay's brutal Agamemnon; he's bloodthirsty and volatile from the start, and soon becomes a mouthpiece for fear-mongering about the barbaric Trojans, in tirades that sadly still sound familiar today. Most versions of Iphigenia's story see her eventually knowingly and willingly go to her death, and El-Bushra and Hill interestingly play with this idea to show Agamemnon's racism feeding a dangerous fanaticism in his daughter; an intense and multi-layered response to the story in this first play. 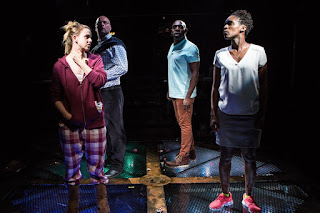 If it doesn't pack in as many different ideas, Chris Thorpe's Chorus is more high-concept. The Chorus traditionally comment on the action while powerless to influence it, and while this is still the case here this particular Chorus probably see themselves as much more powerful than that: Andrew French, Nigel Barrett, Sharon Duncan-Brewster and Louise McMenemy are the Voices, but they represent millions of online viewers and commentators for whom the House of Atreus is something between the Kardashians and Game of Thrones, a bloody soap opera to be judged and dissected by people who deny their own obvious bloodlust. 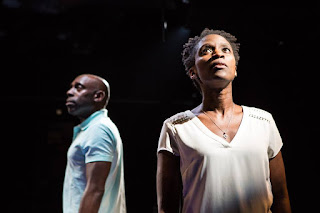 Elayce Ismail's production sees the Voices get more comfortable as they settle down to their bloodsport, kicking off their shoes and jackets and littering the floor of Cécile Trémolières' traverse set until it's covered in sweet wrappers. Recent modernisations of Greek tragedy have used pop songs to haunting effect, something Thorpe and Ismail subvert as the Voices cynically use Lynyrd Skynyrd's "Freebird" to provide bathos to the sacrifice itself. One version of the legend sees Iphigenia spared by Artemis at the last minute, a development both writers touch on in different ways and to very different effect. While I didn't respond as instantly to Chorus as to Iphigenia, its sinister lyrical quality won me over, and I'm hard pushed to pick a favourite; this is an intelligent double bill that leaves the second pairing a lot to live up to tomorrow.

The Iphigenia Quartet - Iphigenia by Suhayla El-Bushra and Chorus by Chris Thorpe, based on Iphigenia at Aulis by Euripides, is booking in repertory until the 21st of May at the Gate Theatre.