Theatre review: This is Living 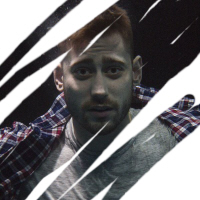 Following a well-received Edinburgh run in 2014, Liam Borrett's This is Living gets re-written as a two-act play for its London premiere, and what I consider very exciting TV-to-stage casting: Never mind your Downton escapees who get the papers het up, Michael Socha is a better actor than he gets credit for, awkwardly sexy and a core Being Human cast member to add to the collection to boot. He plays Michael, who at the start of the play is trying to get a difficult message across to his wife Alice (Tamla Kari.) Namely that she's dead, having drowned the previous day while trying to get their 3-year-old daughter out of a river when she fell in. The child is making a good recovery in hospital but the ambulance was too late for Alice, and every time he sleeps between her death and her funeral, Michael dreams that he's reunited with his wife as she waits to pass on to whatever's next.

Interspersed with these sad scenes are happier ones as we flash back six years to their first awkward meeting, and track their relationship and attempts to have a child. 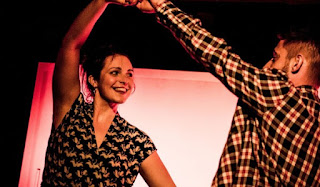 Michael is a well-written character and Socha brings him to nervy life, someone who lost both parents quite young so his goal is to be a dad and create a new family for himself: He's a picture of determination without always having the confidence to back it up (and if the way he shows his nerves is to keep tugging on his T-shirt and flashing his stomach, then so much the better.) The living version of Alice is a fun contrast and a good match for him, up-front and witty. 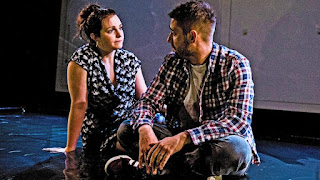 Sarah Beaton's set is a raised platform on which the actors walk in a shallow pool of water, referencing the riverbank where Alice died and Michael returns in his dreams. The first act in particular balances comedy and sadness well, although Borrett also directs his own work and, as is the risk in these cases, the second act's prone to a bit of indulgence. It's not a particularly long play but would still have probably worked better as a one-acter - we sometimes lose focus from the fact that these imagined conversations with his dead wife are an expression of Michael's suicidal feelings, and his way of saying goodbye to her and getting back to his life. 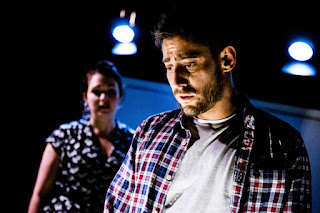 But the play gets back on track as Alice starts to process her own death - initially unable to offer any support to her husband because she's lost more than he has, some humour eventually returns to have their relationship mirror the way it was in life. Socha is so good at injecting a kind of guileless earnestness into scenes that could have been cheesy, like Michael praying to his dead mother to look after Alice when she gets there, that This is Living ends up a sweetly, gently sad success.

This is Living by Liam Borrett is booking until the 11th of June at Trafalgar Studio 2.