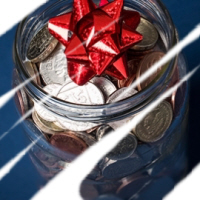 Usually to be found working somewhere like the Olivier, Bijan Sheibani directs in Hampstead's smaller Downstairs space, and brings with him a similarly impressive cast for Hannah Patterson's Giving, which looks at the ethics behind charity. Journalist Laura (Sinéad Matthews) is assigned to interview reclusive billionaire Mary (Sylvestra Le Touzel,) who's just announced the single biggest charitable donation in UK history. In trying to find the person behind the generosity, Laura soon discovers that Mary is taking advice from Michael (Simon Manyonda,) the representative of an American company that matches philanthropists with charities. After a boozy dinner Laura spends the night with Michael, but this indiscretion starts to look a lot more unprofessional as he and the company he works for become the real focus of the article.

Also trying to deal with the recent death of her mother and the fact that she's pregnant after an affair with her editor Jonathan (Dominic Rowan,) Laura struggles to get to the bottom of who Mary really is and why she's suddenly found this passion for philanthropy.

A question that keeps recurring in Giving is that of giving a glass of water to a man dying of thirst, and whether he'd really care where it came from. Are the huge donations of the rich a way of salving their conscience and generating some good PR to offset the murky ways they got rich in the first place, and does that matter if those in need benefit in the end? The world of corporations that profit from "matchmaking" millionaires with charities in also an interesting area that's not often explored.

"Enigmatic" is the word that mostly comes to mind for Patterson's characters, with Le Touzel's Mary not giving anything away beyond platitudes about wanting to do good. Her combination of frosty glare and Yorkshire pragmatism make her seem like a particularly terrifying Apprentice interviewer, and the only thing she can't disguise about herself is her evangelical zeal for Michael - perhaps himself more so than the causes he represents. He in turn keeps us guessing over whether under the charm there's a genuine do-gooder nature or something more calculating; it does mean that, despite moments where we see past the slick surface, it's also hard to buy into the relationship between him and Laura.

And generally the play is less convincing in the personal side than it is at digging into the murky side of charity, meaning it's always interesting but very dry. Although there's suggestions of huge things that could be under the surface, Giving tends to avoid anything too dramatic - not necessarily the best thing for a drama. It remains fascinating in its way, but even a cast as strong as this can't really give it an emotional kick.

Giving by Hannah Patterson is booking until the 11th of June at Hampstead Theatre Downstairs.