PREVIEW DISCLAIMER: This is only on for a week so I don't think the press have been in yet. 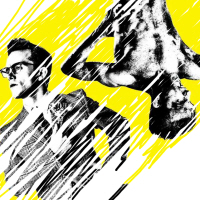 The only reason I knew the Old Vic has a history of presenting dance was that the upper circle is named after Lilian Baylis, who also has one of Sadler's Wells' dance stages named after her. It's a connection new Artistic Director Matthew Warchus said he wanted to bring back in his first season, and he does so by giving a platform to Drew McOnie, the choreographer behind the breathtaking moves of In The Heights, and his own company. It's a high profile that could, and on this evidence should, send McOnie on the road to being the next Matthew Bourne - his Jekyll & Hyde has the dangerous sexiness of Bourne's career-making Swan Lake. McOnie and composer Grant Olding adapt Robert Louis Stevenson's novella, and don't make the mistake of trying to stick to it too closely (the story's too famous for its own good; its whole structure builds to a huge twist that everyone already knows.)

Instead Jekyll & Hyde meets Little Shop of Horrors in a 1950s pulp horror London where Jekyll (Daniel Collins) is a self-harming florist with a shop full of dying flowers, until his own recipe for plant spray brings them to life (literally, as the flowers become dancers.) 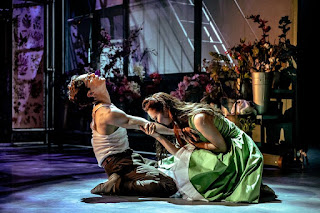 Some of the spray gets into his cuts so Jekyll is also transformed, from geek whose attempts to talk to women end in embarrassment, to the sexually confident Hyde (understudy Jason Winter.) But Hyde isn't just confident, he's violent, first killing off a love rival (Ashley Andrews,) then turning serial killer of the women he picks up. It's McOnie's first attempt at telling a narrative through his choreography and, as someone who doesn't watch much dance, I found it very clear and an exciting story. Having dispensed with the mystery of who Hyde really is, Olding and McOnie come up with a different way of playing with the dual identity, as the initially sweet Jekyll ends up not needing his alter ego to commit atrocities by the end. 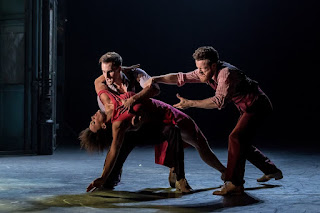 Olding's music and McOnie's choreography have been exciting enough in the past to make this a tempting proposition but I won't pretend the sexy poster wasn't the clincher for me; fortunately Jekyll & Hyde didn't disappoint on any of those levels. The music is interesting, the dance energetic and imaginative - Soutra Gilmour has provided a spinning set of metal frames and fire escape stairs for the dancers to negotiate and it really helps bring the movement to life. And the cast is full of athletic men, often in a state of undress (some rear nudity from Hyde; sadly a modesty pouch for Jekyll's shower scene puts the kibosh on any scrolling alert for Collins.) In fact Collins is so sexy, the most science fiction element of the whole show might be him standing in front of a mirror with his shirt off and being disappointed in what he sees. 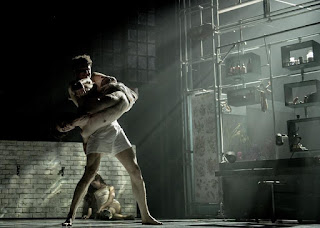 My dance reviews are always going to be a bit "I don't know much but I know what I like." Well I liked this, and McOnie takes on the challenge with a confidence and success that belies how new he is to the spotlight.

Jekyll & Hyde by Drew McOnie and Grant Olding, based on The Strange Case of Dr Jekyll and Mr Hyde by Robert Louis Stevenson, is booking until the 28th of May at the Old Vic.