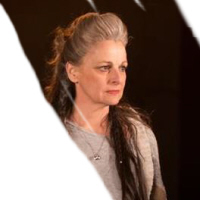 Shakespeare's fevered crack dream of Roman Britain, Cymbeline has come back into vogue lately; the programme notes for the RSC's latest take suggest it's because the context of England in an uncomfortable co-dependent relationship with mainland Europe strikes a chord in the year of the EU referendum. And so director Melly Still and designer Anna Fleischle conjure up a dystopian near-future in which, left to its own devices, Britain has used up its natural resources, the only remaining hint of nature in Cymbeline's court the trunk of a chopped-down tree encased in glass (now a 2016 theatrical meme, what with the similar idea in Elegy.) Innogen (Bethan Cullinane,) daughter of Queen Cymbeline (Gillian Bevan) has secretly married childhood sweetheart Posthumus (Hiran Abeysekera,) a match that enrages her mother, who promptly banishes her new son-in-law.

In exile in Rome, Posthumus praises his wife's fidelity, leading to an ill-advised bet that she won't fall for the charms of an Italian visitor. But Iachimo (Oliver Johnstone) is willing to cheat to win the bet if she turns him down. 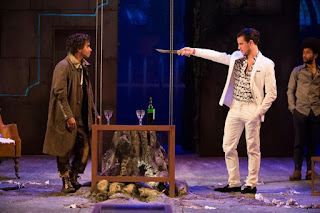 This is the play where Shakespeare basically throws every plot device he's ever used at the stage at once to see what sticks, which means Cymbeline can be tremendous fun but also needs a certain amount of care if it's going to make any kind of sense. And Still's stylish production had mixed success on both fronts. A lot has been made of the fact that for the first time the RSC has gender-flipped the title role; with it comes a swap the other way for the villain of the piece, the King's second wife is now the Queen's second husband, the Duke (James Clyde.) Still says the idea is to get away from the cliché of the wicked stepmother, but the fact remains that as giving big roles to women goes it's a backfire - a scene-stealing female baddie role now goes to a man, while a woman gets surely the blandest of Shakespeare's title roles in return. 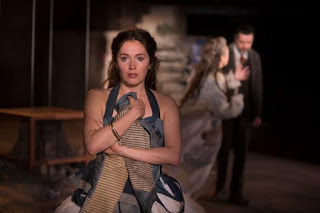 The real lead in this play has always been female anyway, of course, and Cullinane is a credibly ballsy Innogen. There's a nice chemistry with Abeysekera and a darker spark with Johnstone as the seductive but sexually threatening Iachimo. Certainly having someone as good-looking as Johnstone in the role lends the plot an uncomfortable sexiness for the audience: In his creepiest scene where he spies on Innogen in bed after hiding in a trunk, there's no plot-related reason why he should be the one with his shirt off but I'm certainly not complaining (his little brown nipples making a play for this blog's end-of-year awards.) 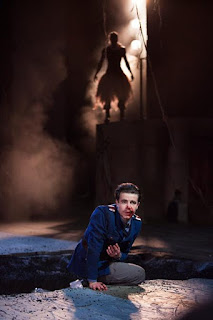 Marcus Griffiths plays Cloten, son of the evil Duke, not so much as a fool as a complete narcissist who basically can't grasp why Innogen could choose anyone else over his good looks. Theo Ogundipe as the Second Lord in attendance to him has some fun moments puncturing his master's ridiculousness in asides. It's fitting that Cloten's comic demise comes at the hands of the play's least self-conscious characters: After the sterility of the court, the tree rises up to reveal in its roots the home of Innogen's long-lost older siblings. Natalie Simpson and James Cooney play them as half-feral, whooping and unpredictable. 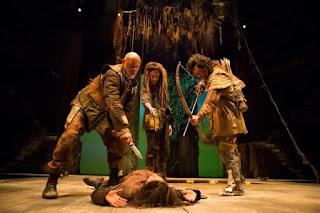 But a three-and-a-half hour running time will try anyone's patience, and though the production's heavy on ideas many add little or are actively distracting, like the soothsayer Philharmonia (Temi Wilkey) wandering the stage throughout, observing the action. Another programme note says Cymbeline's verse works better heard than read, so it's ironic Still makes the audience read a number of scenes, translating the encounters with foreigners and putting the original text on surtitles (sometimes blocked from view of the side stalls by the actors.) Then, having established Rome as a cosmopolitan city speaking modern Italian, why does Cymbeline deal with the Roman officials in classical Latin? 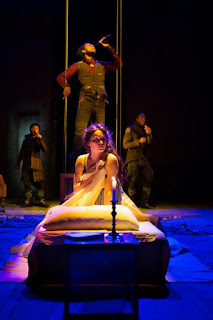 So the production often opts for flourish where it could have done with clarity when dealing with a bizarre, messy plot*. I liked the setting, which I thought was a good match to the story, there's some notable performances and the moments of humour are brought out well in a play of often confused tone. But the production's too indulgently long and the staging sometimes too busy to really untangle the play's knotty awkwardness.

Cymbeline by William Shakespeare is booking in repertory until the 15th of October at the Royal Shakespeare Theatre, Stratford-upon-Avon; then from the 31st of October to the 22nd of December at the Barbican Theatre.

*The subplot with the potion is basically: "It's a health tonic, except it's really poison, except it's really a Juliet-style fake death draught. Got that? OK we're not going to mention any of that for the next couple of acts and then it'll suddenly pay off." Shakespeare even makes fun of his own plotting at the end.
Posted by nick730 at 22:05