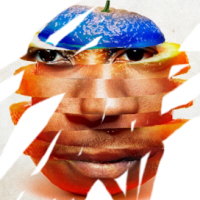 I've been waiting a long time to see Blue/Orange; I missed the National Theatre's original 2000 production, and subsequently the play has gained a reputation as a modern classic - any time a lacklustre new Joe Penhall play premieres, I hear people say he owes his career to this one big hit. A three-hander taking in mental illness, racial stereotyping and professional backstabbing, it takes place in a generic meeting room in a psychiatric hospital. Chris (Daniel Kaluuya) has been sectioned after a public incident involving an orange, but his 28 days of observation are up and it's time to decide if he's well enough to be released, or if he's a danger to himself and others. The diagnosis is that he has Borderline Personality Disorder, but his doctor, Bruce (Luke Norris,) believes he's actually schizophrenic, and calls in a consultant for a second opinion.

He doesn't get the support he expected though as his supervisor, Dr Robert Smith, Lead Singer of The Cure (David Haig) is dismissive of what look like danger signs, and pushes to release Chris and free up a hospital bed. 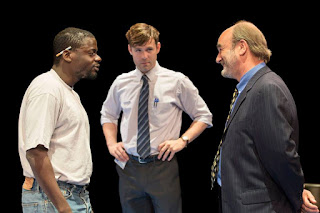 Bounding onto the stage at the start and seemingly excited to go home, Kaluuya's Chris seems like the life and soul of the party, although it soon becomes apparent he's actually very isolated on the outside. Two delusions of his in particular get the doctors arguing though: He insists his father is Idi Amin, and he sees oranges as blue. It makes him of particular interest to Smith, who happens to need a new case study for a book he's writing; it's soon obvious he'll go to any lengths to make Chris his patient. 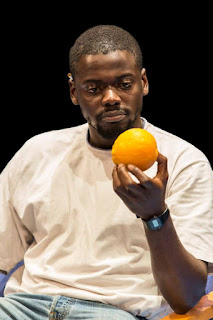 The Young Vic has a history of giving the audience a tour of the play's world as they get to their seats, and for Blue/Orange designer Jeremy Herbert has raised the in-the-round set by one whole level (meaning the back row is in the usually-unused balcony just under the roof, and getting to it is quite a magical mystery tour,) so the audience can enter underneath the stage, through hospital corridors. It also means the consulting room is an isolated island, with a dark pit either side of it in which Chris is sent to lurk when the doctors want to discuss him behind his back. 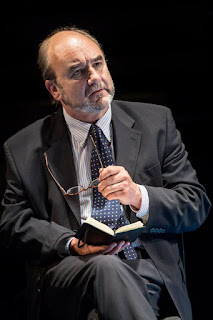 It's an apt staging for a play one of whose many themes is two white doctors, despite their - probably, at heart, entirely genuine - desire to avoid institutional racism, still using a black mental patient to score points off each other and advance their own careers. The affable Haig is canny casting for a consultant whose jolly persona is a way of disguising his own ruthlessness and ambition, and one thing Blue/Orange does well is deal with genuine issues while having its characters undercut them: Smith's points about needing to understand why a disproportionate amount of black men are mentally ill are valid (how badly will your paranoid tendencies increase if people really are treating you differently because of your skin colour?) but he's also using them to play the race card and trap Bruce. Norris (whose hair the Young Vic has an ongoing vendetta against; this time it's pasted across his forehead) brings a more genuine youthful earnestness to Bruce that'll prove useless against his supervisor's cynicism. And it's great to have Kaluuya back on stage, with his ability to flip between charismatic enthusiasm, paranoid terror and barking rage; it's a real powerhouse performance although at times it feels like Penhall has written a showcase of an actor's range rather than a character, which can take you out of the moment; I wished director Matthew Xia had toned down some of the many personality flips. 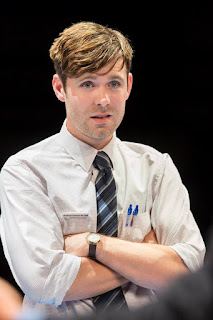 Another thing Xia's production can't do is disguise the problems Penhall's script has in balancing the numerous themes it covers; The play is admirably ambitious but at times it feels like it can't decide what it's really about, while the plotting can also be very clumsy - repeatedly, Bruce leaves out a vital piece of information about Chris' behaviour until very late in his discussions with Smith (he doesn't even mention Idi Amin and the blue oranges until Smith's almost signed Chris out of the hospital.) The revelation of what Chris did to an orange to get him sectioned isn't as big a surprise as it thinks it is either, and if the final few moments are meant to represent a shift in the power dynamic between the two doctors, it's a bit too understated a twist to really challenge how far the other way the scene has gone until then. So, possibly because I had such high expectations, I was slightly disappointed. Strong performances and clever design add to a production with many outstanding moments, but a play that overall never quite coalesced for me.

Blue/Orange by Joe Penhall is booking until the 2nd of July at the Young Vic.