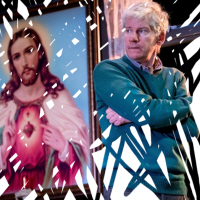 Apart from my regular trips to Stratford-upon-Avon it takes a lot to get me to the outer reaches of the Oyster card for theatre - there's already more than enough in Zones 1-2. But even if, like Jumpers for Goalposts did three years ago, Folk does get a more central transfer, once again a new Tom Wells play is reason enough to travel to Watford rather than risk missing it. Wells' full-length plays have all featured an introverted young gay man from somewhere outside Hull, but while the character of Stephen (Patrick Bridgman) is 50-something, he's still similar to Stitch, Billy and Luke in most ways. The setting is the front room of Winnie (Connie Walker,) his best friend, a Catholic nun with a fondness for cigarettes, Guinness and - this being 2016 - playing the spoons. A young man a few doors down has died in a car accident, and to cheer themselves up after the funeral the pair enjoy their favourite Friday night activity: Folk music.

Someone seems to think this is disrespectful though, as a brick comes flying through Winnie's window - 15-year-old Kayleigh (Chloe Harris) has thrown it on a sudden impulse and is suitably embarrassed now. 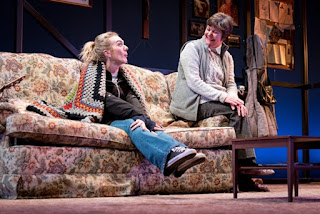 Stephen isn't impressed by an intruder on their cosy Friday ritual but Winnie sees Kayleigh - who's lost her mother, hasn't been to school in months and was closer than she's letting on to the dead boy - as someone who needs a friend and not only invites the girl in but, on finding out she likes the same music as them, starts making plans for them to perform publicly as a folk trio - much to the horror of her reclusive friend. 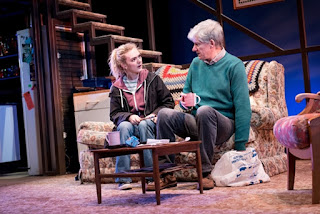 This is a bit more of a slow burn than Wells' last couple of plays but his usual sly humour with its deceptive cosiness gradually got the audience on-side; this isn't a show packed with one-liners and setpieces but one to gently get under your skin. And it's got a gem of a central character in the down-to-earth, riverdancing nun whose health is a lot worse than she lets on - Kayleigh may complain that the tune Stephen's composed in honour of her 35-year "nuniversary" is too sad, but it's fitting for a story that's in many ways Winnie's loving farewell, finding two vulnerable people and making sure they'll look after each other. 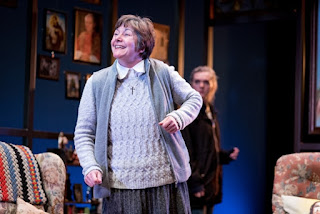 Tessa Walker directs with suitable simplicity, matched by Bob Bailey's set which despite being pretty bare-boned still gives an idea of the clutter of Winnie's home. Fittingly, the other biggest contribution is from composer James Frewer, whose own original tunes mix in with the traditional folk songs that the characters bond over. Perhaps this isn't the most immediate hit out of Wells' plays but his writing has a tendency to stay with you long after you leave the theatre, and Folk has that in spades - I was close to tears watching it but, if anything, even more so while writing this review, as it's the kind of seemingly innocuous story with a real human warmth that won't let you go. Going by overheard conversations, I wasn't the only person to make a special trip for this, and once Tom Wells' status as a national treasure-in-waiting gets recognised more, I think that number's only going to grow.

Folk by Tom Wells is booking until the 28th of May at Watford Palace Theatre.