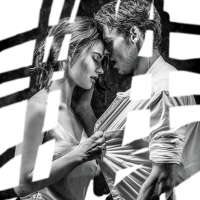 The SirKenBranCo season at the Garrick has put two of my least favourite Shakespeare plays at the centre of its programming, and where The Winter's Tale at least had Dame Judi bringing attention to one of the unsung standout roles in that play, a couple of good turns don't stop Romeo and Juliet from being every bit as much of a chore as I usually dread (and am occasionally pleasantly surprised, but not often.) This time SirKenBran doesn't take to the stage himself, sharing directing duties with Rob Ashford for the story of two wealthy Verona families who've been at war for generations, for reasons long-forgotten. Romeo Montague (Richard Madden) sneaks into a party held by the rival Capulets in hopes of bumping into Rosaline, the girl he fancies, but forgets her as soon as he spots Juliet (Lily James.)

They decide to get married for some reason, but keep it secret because of the family scandal it would cause - the lies and misunderstandings lead to a lot of people winding up dead. 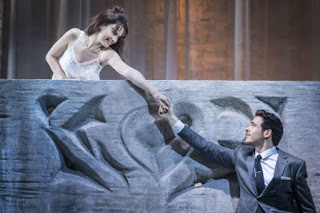 The production keeps the Italian setting but moves it to the Fifties, Christopher Oram providing one of the monolithic sets he likes, to evoke a market square and the vault where the story ends up; the costumes are strictly monochrome to bring to mind a Fellini film. The characters have a tendency to go off-script in Italian, especially early on, in an unsubtle attempt to drive the setting home. Ironically it's Meera Syal's Nurse, Brummie accent and all, who makes the best use of the conceit, a properly overdramatic, clingy Mediterranean mama in one of the better performances of the evening. (And her performance is more consistent to the setting than the overall production, which stays strictly 1950s throughout except when the party scene incongruously turns into a 21st century club.) 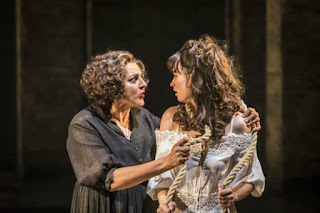 The other notable piece of casting is Derek Jacobi as a much-older-than-usual Mercutio; his age might have become a talking point but it ends up feeling pretty organic casting, not the usual smutty contemporary but a dapper, acidic older man Romeo and Benvolio (Jack Colgrave Hirst) are fond of. His death isn't the result of the usual hot-headed moment, rather a semi-serious challenge that goes badly wrong. 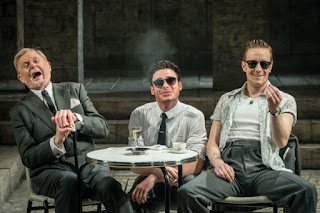 Elsewhere Tom Hanson (whose mother Samantha Bond was Juliet opposite KenBran's own Romeo,) is the benign kind of Paris and Samuel Valentine, a Romeo himself at the Globe last year, becomes a young and naïve Friar Laurence. But the play is called Romeo and Juliet and, leaving aside my well-documented feelings about it not really being a love story, if you are going to play it straight then you have to at least give me some reason why the two might click. And while James' Juliet is sweet with a hint of steeliness ALTHOUGH AT ONE POINT SHE CARTWHEELS OFF THE STAGE AT THE END OF A SCENE WHY DOES SHE DO THAT WHY, there's little chance of chemistry with Madden's bland Romeo; in one of the few pieces of directorial flourish, we see Juliet necking a bottle of champagne before the balcony scene, which is about all the reason I can see for her falling for his not-particularly-apparent charms. But the breathless promotional posters don't translate into a sexy show by any stretch of the imagination. 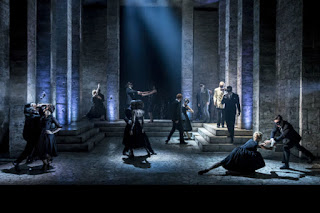 And for a show with two directors this really isn't particularly big on ideas - beyond the design and occasional bursts into Italian the staging conceit doesn't make a big impact, the production largely classical and respectful. There's a lovely visual in the scene of Juliet faking her own death but such moments are particularly notable for being few and far between. To the nonexistent sightlines from the back of the Stalls (not quite as bad as before because the person in front of me's head wasn't as big or constantly-moving as others',) we can also add more discomfort as the weather gets warmer and the cramped seats get particularly claustrophobic. It means the production demands ever more patience without particularly rewarding it: Ashford and KenBran actually do make many of the text cuts I think are useful in an overwritten play, including dispensing with the Apothecary entirely*, but a slightly reduced running time doesn't help much if a determinedly middle-of-the-road staging means it feels like the full three hours anyway.

Romeo and Juliet by William Shakespeare is booking until the 13th of August at the Garrick Theatre.