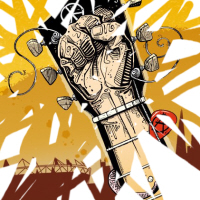 John Gay's 18th-century Beggar's Opera has been called a precursor to the modern musical as well as directly influencing various adaptations - most famously The Threepenny Opera. Brecht and Weill's version is about to get revived at the National, so whether that's good or bad timing for a new rewrite remains to be seen. Dougal Irvine's The Buskers OperaSHOULD THERE BE AN APOSTROPHE IN THERE SOMEWHERE OR ARE YOU TRYING TO USE "OPERA" AS A VERB?* references its predecessors in its opening number, in a self-referential style that will become typical of the rest of the evening: Macheath (George Maguire) is a former X Factor contestant kicked out at Boot Camp because of his temper, and now films himself singing anti-establishment songs and posts them on a fairly successful YouTube channel.

The play takes place in August 2012 in London, with the Olympics about to begin, and Mayor Lockitt (Simon Kane​) doesn't like Macheath showing up the city's dirty underbelly. He and dying newspaper mogul Jeremiah Peachum (David Burt) plot to control Macheath's message and discredit him, but they needn't bother as the busker's own nature is enough to damn him. 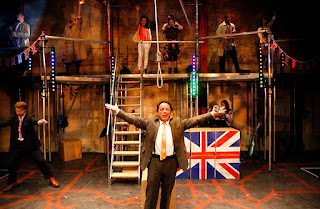 Irvine's affable take on political satire is strongest in its lighter first half, as the two millionaires take against Macheath particularly personally when it turns out he's slept with both men's daughters: Peachum's dippy hippy daughter Polly (Lauren Samuels) has ended up married to him after taking his jokey proposal seriously soon after they met; but she's got competition from Lockitt's vapid shopaholic daughter Lucky (Natasha Cottriall,) who's just found out she's pregnant by him after a one-night stand. The leads, as well as the supporting cast, are strong and have enthusiasm for Irvine's enjoyable tunes and lyrics - the entire show is in rhyming couplets - that revel in some very cheesy rhymes. 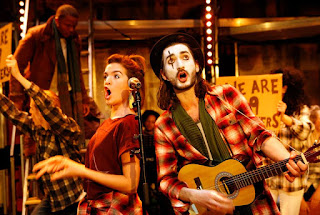 There's also comedy in the obvious caricatures among the characters - the mayor may not be blond or called Boris but there's no mistaking the target of Kane's carefully disheveled air and naked Prime Ministerial ambition. Ian's comment that Macheath was a Russell Brand figure was one I also heard other audience members make; not just in the scruffy Pierrot persona he adopts but in the way the play - which openly admits its anti-hero is a massive dick - makes him a womaniser who rants against the Establishment while enjoying all it has to offer, talking about society's forgotten while himself ignoring the beggar (Ishmael Gander) who comes up to him every day. 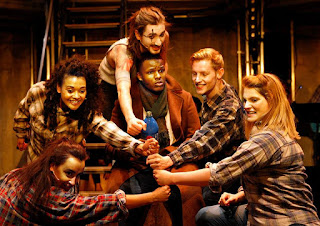 Director Lotte Wakeham has a harder job making sense of the second act, with its mix of the painfully earnest and a huge, sudden death toll that never quite works as black comedy. She just about avoids letting the whole thing turn mawkish, but it's a struggle. As a result the evening feels longer than it should, but it is helped along by some catchy and witty tunes; and at least having him play a modern-day busker means Maguire's numerous tattoos can be left alone, and he doesn't need to be half-coated in orange paint like in Sunny Afternoon.

The Buskers [sic] Opera by Dougal Irvine, based on The Beggar's Opera by John Gay, is booking until the 4th of June at Park Theatre 200.

*I opera every day before breakfast
You opera very well
He/she/it operas a bit too often if you ask me
We opera like there's no tomorrow
You all opera 'til the cows come home
They opera 'til they dropera
Posted by nick730 at 23:07