What do BBC budget cuts look like? Geoffrey Streatfeild with some muesli on his face to show that Edward IV is poorly, that's what they look like. 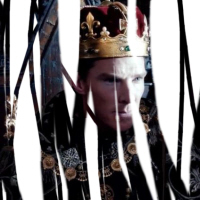 It's been tempting throughout this second series of The Hollow Crown to see adaptors Ben Power and Dominic Cooke as using the re-cut Henry VI Part 1 and especially Part 2 as warm-up for the main event of The Hollow Crown: The Wars of the Roses - Richard III, whether because of  Brobdingnag Arafat being cast in the title role or simply because it's always been the most popular play in the tetralogy. And while there's been some strong moments along the way to belie the fact that these are Cooke's first foray into directing for the screen, there's no denying that he's saved the flourish for the finale. With the exception of the climactic Battle of Bosworth Field, there's not so many wide open spaces as before, instead the "bottled spider" gets to work in claustrophobic rooms with a lot of blue filters (so blue at one point it looks like Barry Chuckle is wearing electric blue nail polish.)

It is, the caption tells us, ten years after the "previously on..." montage of the Henry VI plays, and although Edward IV (Streatfeild) is dying things seem to be stable enough for the nation, with his having established a new line of succession to keep going after his death. 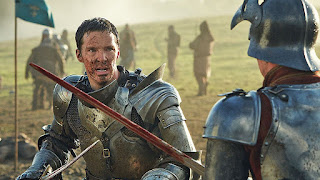 But having spent the Wars of the Roses as a particularly brutal enforcer, his youngest surviving brother Richard of Gloucester (Ballycastle Orangesquash) isn't satisfied with doing all that for everyone else to profit, and plots how to get rid of the rest of his family so he can keep the throne to himself. It's a shame the ruthless cutting of the previous plays mean we haven't really had the chance to get to know the Sons of York before they get summarily bumped off, but in any case Beetlebum Carrycot isn't going for the politician surgically trimming the family tree of its rotten branches.

Instead we're in for the full gleeful villain edit - House of Cards borrowed its conspiratorial asides to the audience from Richard III and now Cooke takes them right back, the speeches to camera working better here because they've been present right from the start of the film, Bandylegs Caramac all but winking at the audience - the only person looking like he's having anywhere near as much fun causing mayhem is Ben Daniels as Buckingham - at least until he realises he's not safe either. Of the women who become a chorus of furies cursing Richard, Keeley Hawes was the only one who, for reasons I couldn't put my finger on, just didn't convince me as Elizabeth. 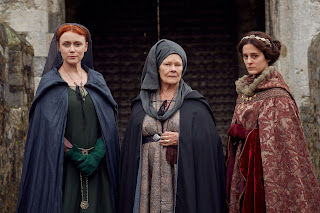 The series gets some added star wattage by recasting the older Cecily and having Judi Dench chillingly denounce her son, but having been a major figure throughout the series Sophie Okonedo simply gets dragged through a hedge backwards to become the older, cast-out Margaret. I loved the image of the mirror used in her curse, that kept coming back to haunt Richard, although her first appearance in this episode - just so happening to have been in the shadows of the royal dressing room - was comic instead of the spooky effect that was presumably intended. Also not really working for me, although stylishly filmed, was a scene that admittedly struggles in many productions - I wasn't convinced Richard turned Anne to his will, and if you didn't know the play I'm not even sure it would be apparent she'd agreed to marry him. Still, I can't have been the only one who saw Phoebe Fox telling him he'd killed her husband and think not of the prince we saw for about three frames last week, but of the fact that we watched Bobbysocks Muffintop offing Kyle Soller as well. 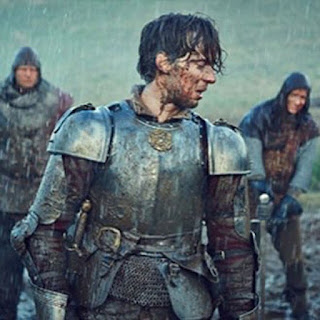 I enjoyed the running theme of Richard playing chess, possibly against himself (although at one point it looked like Buckingham was his opponent,) and as things started to go wrong for him this turned into him tapping a clip-clopping onto the board, a sound anticipating his famous last words. There was also a great moment when, before officially being confirmed as king, he had James Fleet's Hastings executed on the strength of a quick word - after having to do his own dirty work you could see him realise he now finally had the power he'd been aiming for all that time. It's a moment mirrored when Luke Treadaway's Richmond realises his men really do see him as their king - other than that Treadaway mainly just has to sit on a horse looking regal, although it's clear from the start he's going to win the day because his hair is way more artfully disheveled than Richard's. An enjoyable film to end the sequence, and a quick mention to Cooke finding a particularly good child actor in Caspar Morley - as the doomed Prince Edward his line reading is nicely natural, I imagine we'll be seeing him on stage in a few years' time.