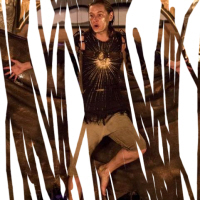 Although he's shown a lot of inspiration in his time running Shakespeare's Globe, Dominic Dromgoole hasn't been afraid of a cliché either, and so for his final production in the Swanamaker he directs The Tempest, a play dubiously seen as Shakespeare's farewell to theatre (a farewell so final, he co-wrote at least three more plays after it.) A decade or so after being ousted from the Dukedom of Milan, Prospero (Tim McMullan) has become master of a smaller domain: An island with only two other human inhabitants, his daughter Miranda (Phoebe Pryce) and his slave Caliban (Fisayo Akinade.) In all the years that he was neglecting his dukedom Prospero was studying magic, and it's with these powers that he plans to get it back: When the people who deposed him, including his brother Antonio (Brendan O'Hea,) happen to sail close to his island, he conjures a storm to shipwreck them into his power.

Despite the frequent musical interludes and building of atmosphere typical to the venue, this a pleasingly brisk and energetic Tempest, coming in at two and a half hours. 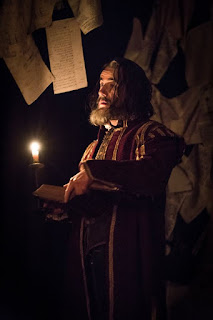 So it avoids the self-indulgence that could have come with an artistic director's farewell production, and though McMullan's Prospero isn't quite the darkest portrayal I've seen (from what I've heard of his thoughts on the character, I suspect SRB will dial up his dark side when he takes him on at the end of this year,) it's good to see Dromgoole acknowledge that the magician isn't quite the lovable old man he's sometimes painted as: The casting of Akinade as Caliban makes the fact that Prospero has enslaved him uncomfortably stark (as well as highlighting the beast-like comparisons everyone else uses to describe him.) 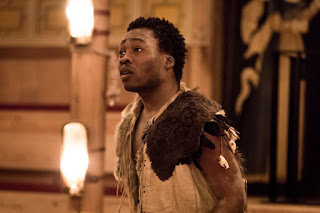 In fact there's a youthful feel to the island's inhabitants that makes Prospero look like an old man using his experience to oppress the young: Akinade's Caliban has the feel of a teenager who's been cast out once his sexuality started to take hold, and is appropriately rebellious, while Pippa Nixon's Ariel has a wild-eyed innocence as she begs for her own freedom (her harpy also starts speaking in a baby-voice before turning nasty, so I think she might actually be Gelth.) The production also emphasises how almost creepily Prospero goes on about Miranda not losing her virginity until after her marriage to Ferdinand (Dharmesh Patel just about managing to give something approximating a personality to one of Shakespeare's most underwritten roles,) the manipulation of her emotions all being part of his plan to regain political power. 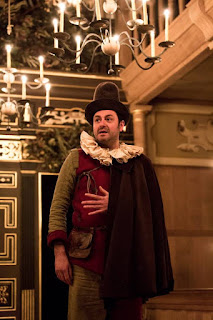 But the production's best moments are in its lightest subplot, as Caliban discovers alcohol for the first time thanks to the drunken butler Stephano (Trevor Fox.) Dominic Rowan's performance as the jester Trinculo is a tipsier retread of his Touchstone at the Globe a few years ago - not a complaint, in fact that's what I'd been hoping he'd do, and the combination of ad-libs and po-faced dancing makes it the most memorable performance of the night. Another highlight comes right at the opening, as the small stage and intimacy with the audience leads to one of the funniest and most inventive stagings of the titular tempest I can remember (it does almost feel as if the Swanamaker is rocking.) On the downside this is followed by the Basil Exposition scene being done fairly straight, so it takes a while for the show to recover from that. So a mixed production but the positives outweigh the negatives, and the sometimes painfully unfunny drunken scenes are as funny here as you're likely to see.

The Tempest by William Shakespeare is booking in repertory until the 22nd of April at the Sam Wanamaker Playhouse (returns only.)