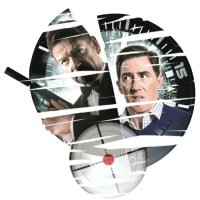 Déjà vu tonight as, only a couple of nights after Miss Atomic Bomb, another show goes through all the motions to make me laugh and fails spectacularly. That show had the word "bomb" right there in the title, just like Francis Veber's The Painkiller has the word "pain" to describe what it'd be like watching it. The fourth show in the SirKenBranCo season (the third was a revival of Red Velvet, which I'd already seen first time round,) Sean Foley adapts and directs a production originally seen in Belfast a few years ago. Alice Power's set is the familiar farce setup of two adjoining hotel rooms, the communicating doors left unlocked because plot. In the room on the left is Ralph (SirKenBran,) a hit-man who's chosen it as the window offers the perfect shot for the assassination he's got planned. Next door is Dudley (Rob Brydon,) in London to try and make up with his estranged wife Michelle (Claudie Blakley.)

When she refuses to even take his call, Dudley makes a couple of noisy attempts to kill himself, alerting both the porter (Mark Hadfield) and Ralph. To stop the porter from calling the police, Ralph offers to keep an eye on Dudley. 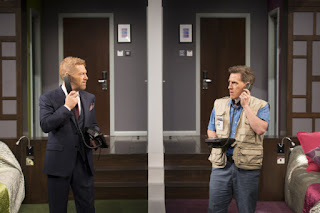 So the stage is set for a lot of standard farcical shenanigans, from Michelle's new doctor boyfriend (Alex Macqueen) injecting horse tranquiliser into the wrong person, to Ralph locking a policeman (Marcus Fraser) in a cupboard, and I'm afraid none of it worked for me. There's definitely a very '70s sitcom tone to the farce, with a lot of trousers falling down, and the porter repeatedly walking in on the men and thinking they've been having sex. So, although Brydon is an always likeable comic actor and Branagh also has strong comic chops (who can forget the gales of laughter when he applied to be Artistic Director of the RSC?) there isn't the material here for them to work with. 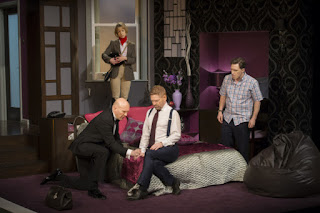 I think the location of the affordable seats was en even bigger problem here than usual, because there were actually a lot of laughs from the audience in general, but noticeably fewer from the rear half of the stalls where we were sitting. Having half a dozen constantly-bobbing heads directly between you and the stage, so you have a couple of moving gaps from which to catch glimpses of the action, is never ideal. But all comedy and especially farce relies so much on timing, and for me the theme of the evening was people laughing, and me then having to try and find which of the little gaps I could actually see what they were laughing at from. There's really no excuse for them to be selling these seats in 2016, even at a discount, but to be honest if they took out all the seats with a shit view, the Garrick would technically qualify as a bijou fringe venue. 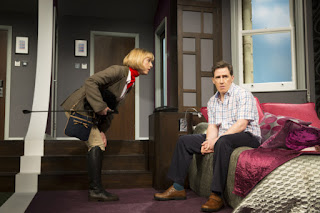 I don't, to be honest, think I would have enjoyed The Painkiller much more from a good seat, so I wouldn't recommend splashing out the cash on it. But with two more return trips planned in this season, I'll be quite glad if, when SirKenBran's done with the Garrick, it goes back to hosting dodgy jukebox musicals rather than anything I might actually want to see (or, in the case of this season, see parts of.)

The Painkiller by Francis Vebber in a version by Sean Foley is booking until the 30th of April at the Garrick Theatre.