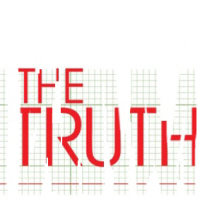 Prolific French writer Florian Zeller is fast becoming ubiquitous on the London stage; after the pairing of The Father and The Mother took a dark and moving look at crumbling minds and crumbling relationships, a change of tack with a much lighter look at rocky marriages in The Truth (which also has a companion play, and I imagine we'll see The Lie here too soon enough.) For the last six months Michel (Alexander Hanson) has been having an affair with Alice (Frances O'Connor,) the wife of his best friend Paul (Robert Portal.) They've been meeting in the afternoons in a hotel room, but things get derailed as it seems Paul and Michel's wife Laurence (Tanya Franks) might have cottoned on to the affair. Alice thinks they should just confess all to their spouses but Michel thinks they can brazenly style it out - presumably not realising just how bad a liar he is.

Lizzie Clachan's set is a slick monochrome collection of sliding panels (well.. the vending machine did struggle a bit with getting onstage) and Lindsay Posner's production is similarly slick. 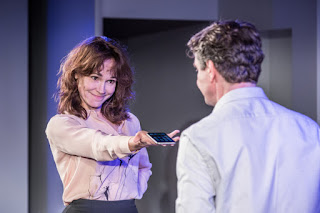 Although only 90 minutes long, The Truth does take a while to get going; the whole thing is essentially a sitcom, and the first half in which Michel and Alice make rather desperate attempts to hide their relationship is well-done, but certainly nothing new. (In fact I mainly amused myself during it with realising how much Portal is the real-life Steven Toast - as he mainly seems to appear in fairly camp, OTT shows it doesn't usually stand out as much as in something comparatively naturalistic like this.) 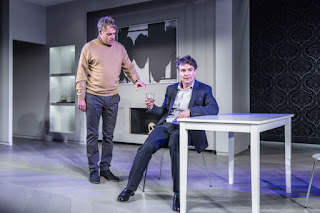 The second half happily kicks up a gear though, as the cheating couple get blindsided by just how much their spouses do or don't know about what they've been up to. Particularly since, in a comic version of the way he plays mind games in his more serious plays, Zeller is keen to keep the audience guessing every bit as much as the characters. 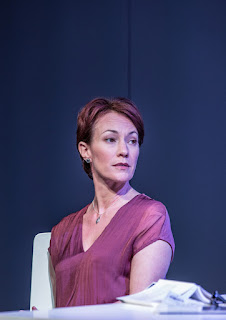 I did wonder at times how literal Christopher Hampton's translation is - Michel in particular is terrible at concealing anything he doesn't want people to know, very obviously playing for time by repeating people's questions back to them; it does make the dialogue feel a bit stilted at times though. Overall there's a few big laughs and some clever trickery with the audience's expectations, but The Truth didn't quite have the wow factor for me.

The Truth by Florian Zeller in a version by Christopher Hampton is booking until the 7th of May at the Menier Chocolate Factory.