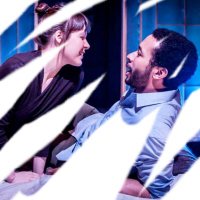 At the office where I used to work several years ago, a (white) woman on maternity leave came back in one day so everyone could see the new baby she'd had with her (black) partner. An older colleague was absolutely smitten with the baby, and her compliments included "Isn't she beautiful? And she hardly looks black at all!" It's a gobsmacking comment that came to mind during a look at how things are for interracial couples - and their mixed-race children - in America, as Aurin Squire advises Don't Smoke in Bed. In fact smoking, in bed or elsewhere, is something Jamaican-American Richard (Greg Lockett) and Irish-American Sheryl (Clare Latham) have just agreed to give up together when they start a series of interviews with an (unseen by the audience) reporter on a webcam: The New York Times Sunday magazine is doing a feature on various couples in their bedrooms.

In fact Richard and Sheryl are chosen to be a recurring feature, so we get to see them talking about their relationship over several eventful months that include the birth of their first son. 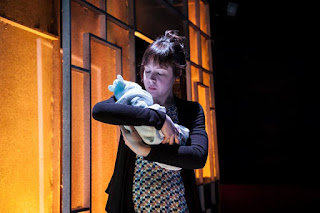 Assuming that, of the various couples chosen, they are meant to be "the interracial one," they focus their discussions on race (although the interviewer never guides them in this direction - indeed we never hear her, and the only questions we hear are a handful that have been sent to them in advance, generic stuff like "how did you first meet?") Despite this their confessionals turn up a lot of real tensions they didn't know they had, and which put pressure on their marriage. 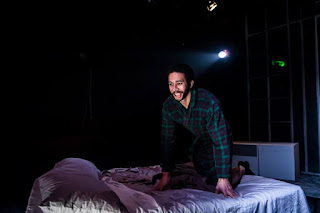 Both characters are academics, which could hold the risk of Simon Gray-style smugness, so it's to the credit of both Squire and the two actors that they come across as hugely sympathetic and a couple the audience can really root for. Inevitably their happiness can't last (if for no other reason than there wouldn't be much of a story to tell if it did) but it's still upsetting to watch historic racial tensions get in the way of a couple who are otherwise so well-matched. This being an American play about race, even in the present day black and white living together is going to turn out to be nigh-on impossible. But in the context of the current theatrical focus on women's inequality, it's interesting to see Richard shut down Sheryl's comments about the different standards women are held up to: Some forms of prejudice would appear to be more important than others, at least in a country with a history like America's. 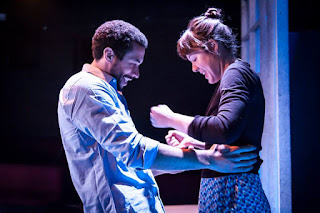 So there's a lot of very intelligent arguments being put forward in Squire's play - including Sheryl's questions about being the white parent of a child whom people will inevitably see as black - presented in an entertaining way that avoids lecturing. Andrew Twyman's production brings a lot of warmth to it, as well as, on a traverse set that wouldn't normally be ideal (this is the Finborough's Sunday-Tuesday show, so it's having to make do on the Merit set) blocking things cleverly so that neither audience bank feels left out. Between this and Obama-ology both being highlights in the alternate slot, if Squire returns to this theatre hopefully he'll get a shot at the main show next time.

Don't Smoke in Bed by Aurin Squire is booking in repertory until the 22nd of March at the Finborough Theatre.