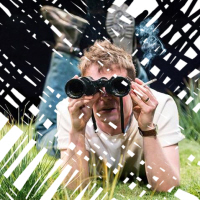 Time for another round of Robert Holman roulette: For a hugely influential playwright* he has one of the most understated styles imaginable. It means I don't like to miss his plays because on the right day they can be gently, powerfully moving; but it feels risky because on the wrong one you get something like the notoriously dull Making Noise Quietly. But I was also interested to see German Skerries if only because the Bush Theatre uses the script to wallpaper the urinals in the gents', so if nothing else I was familiar with the title. The titular German Skerries are a treacherous collection of rocks by the mouth of the River Tees, so named when a Luftwaffe pilot fell foul of them during World War II. By the late '70s when the play is set, they're mainly frequented by cormorants, so a nearby outcrop with a good view of the skerries is a popular spot for bird-watchers.

This is where, in the opening scene, we find Jack (George Evans) watching a ship get piloted in, when 59-year-old schoolteacher Martin (Howard Ward) arrives to lock his bike away in a nearby shed. 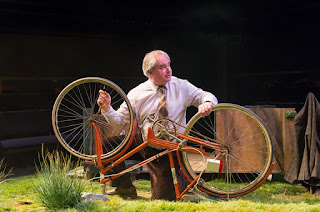 The gregarious Martin starts up a conversation with the younger man in which we find out a bit more about them and the area, which is dominated by steelworks - an industry still going strong at the time, but even so Holman's play has a feel of nostalgia for a way of life that would soon be at risk. The whole play maintains this gentle pace, with even the most major incident - Jack and his wife Carol (Katie Moore) return to the spot later, only to find an injured steelworker (Henry Everett) - being played in a low-key way. 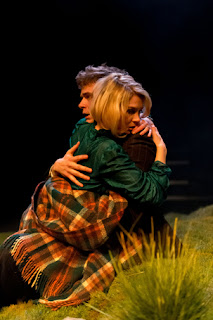 Director Alice Hamilton doesn't try to jazz up Holman's simple story, which is probably for the best: Although not my favourite of his plays I've seen, this does continue a good run which by now means I've liked more of his work than I've disliked. As ever its meaning is vague, although there are moments of quiet wisdom - I particularly liked Martin's advice that if Jack has kids, he should teach them to love him but not feel responsibility to him, they're not the same thing. 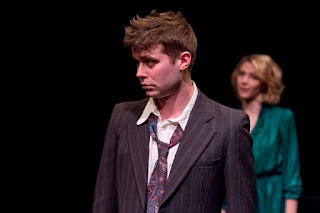 That particular thought comes after Martin's been musing on his own wasted potential after staying in the area to please his parents, and that if anything is the play's overarching theme; that, and (on a grassy set from James Perkins, that gets littered to Martin's great consternation with Jack's cigarette butts and sweet wrappers) the environmental impact of the local industry: Like the characters, the skerries have something under the surface as well, in this case something dangerous courtesy of the steelworks. It's hard to say what the appeal of German Skerries is, but there's definitely something that gets under your skin about Holman's better work.

German Skerries by Robert Holman is booking until the 2nd of April at the Orange Tree Theatre; then continuing on tour to Reading, Scarborough, Lancaster and Hull.

*both Simon Stephens and David Eldridge cite him as their biggest influence - your mileage may vary on whether you see this as a recommendation or not
Posted by nick730 at 17:43